The Flash Season 3 Review – Cause and Effect – How and Why 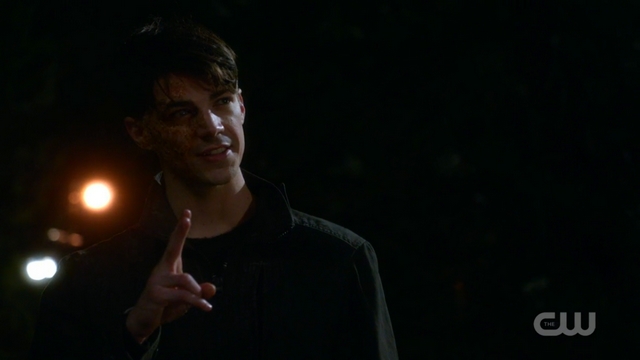 Before you can say be back in a flash, here we are this week’s new episode. Spoilers warnings as always. So our episode picks up right where we left off in episode 20. Barry (Grant Gustin) is staring down a very evil version of himself, revealed to be Savitar.

The episode wastes no time and explains his origin — I’ll try to keep it simple as possible. While fighting Savitar our hero creates time remnants. Only 1 survives and for whatever reason his life sucks. Everyone shuns him and he grows hateful. To subside his pain he opts to become evil and ruin their lives. So two questions arise as he explains all of this. One; why would a temporal copy of Barry face such harsh discrimination from generally good people? Two; how does Savitar exist exactly? 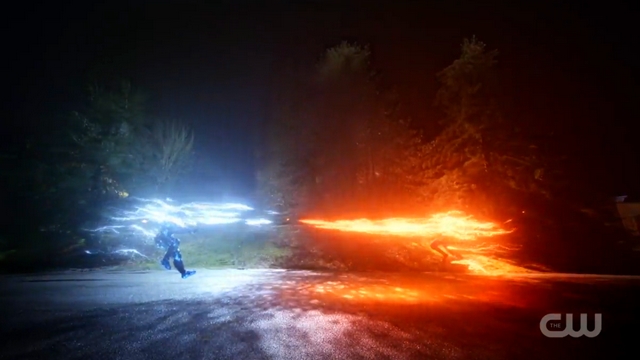 So this is where things get meta. Future Barry is Savitar and he only exists because he kills Iris and so forth. He is essentially a time paradox. Time despite being so delicate, can be manipulated enough where you can be in control. Now for a show that has set sensitive rules for time and so forth…I find this all hard to shallow. But I realize the argument for suspension of disbelief can be silly. After all, we’re watching a show about a 28 year old that can run faster than light.

Any who back to the fun stuff. Savitar (evil Barry doesn’t sound cool) brushes off any notion of Barry trying to manipulate time himself. This quite is ironic because BA messing up the timeline is season 3 in a hilarious nutshell. Our hero refuses to be played with and attacks a suit less Savitar. The suit however seems to operate autonomously and attacks our hero. The two opposing speedsters end their long conversation by launch massive lightning bolts that cancel out in a massive explosion. 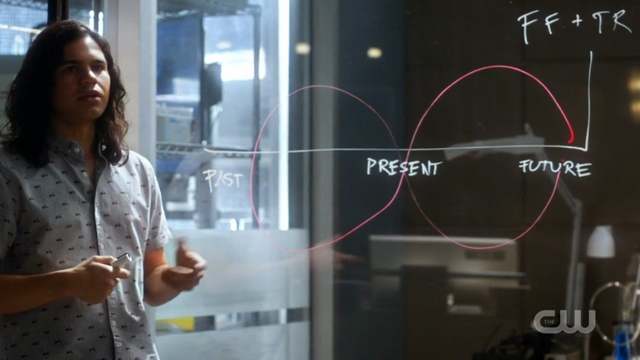 Back at Star Labs, the team asks the same questions we have. How and why is Savitar here? They eventually realize he was able to manipulate time and circumstances to his favor. They also ask how could a version of Barry hate them. That’s a very good question with no answer at present. At the same time Tracy Brand (Anne Dudek) is working hard on the speed force cannon. However she’s reaching some creative road blocks. HR (Tom Cavanagh) tries to help but ultimately ends up causing some comedic sexual tension among them.

Cisco (Carlos Valdes) and Julian (Tom Felton)come up with a counter measure against the god of speed. If Barry has no memory of an attack plan, the villain can’t stop it. So Mr. Allen agrees to have his memory tampered without a second thought. Joe (Jessie L Martin) being the voice of reason notes that this is in part Caitlin’s (Danielle Panabaker) expertise. However her being Killer Frost means 1 less genius on board. 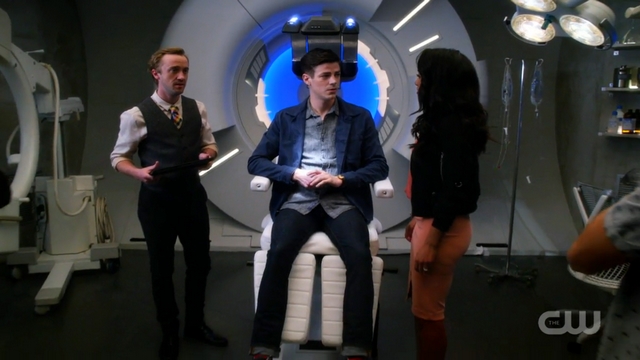 So they’re able to shock Barry’s mind and it backfires. Instead of his short term memory, he remembers nothing. Name, Iris, the team, nothing. So we have a new Barry who insists on being called Bart. Everyone tries not to freak out. But for the audience this is a lot of fun, he’s just a guy right now. We also learn that in his younger days he was something of an anime diehard. I could totally see Barry doing kamehameha poses. Fun fact: this episode aired on the Japanese recognized holiday “Goku Day”.

Cecil (Danielle Nicolet) summons Barry for his help with a criminal case. This is all well and good until they let her know he has amnesia. A criminal is going to walk if Barry can’t testify. So Julian and Cisco engineer glasses where they can stream answers to BA. So how effective could this be? Well not very friend. Barry’s sweat proves to be their undoing and Heat Monger’s case is dismissed, so he walks. 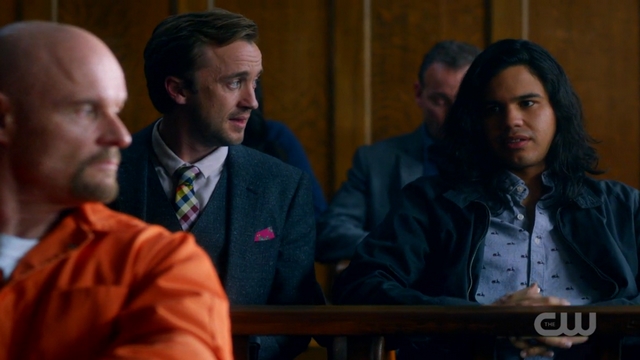 It bares mentioning that this episode is really a treat because we essentially get to see Grant Gustin be 3 different people. This happy Barry is rather refreshing because he carries no baggage. Our hero hasn’t been completely happy since…well never. Even Iris can’t help but latch onto this Barry. As they return to their pad, Barry asks the question we’ve had since midseason. How can they afford that place? Alas no answers.

Barry finds himself looking at a photo of his parents. Iris unfortunately can’t bare to them him the truth. The two still share chemistry as they begin to kiss. In the midst of this makeout session, he activates his powers inadvertently. Well that’s not quite true, you can’t argue that his powers activate because he was sexual aroused. But hey um whatever motivates you. 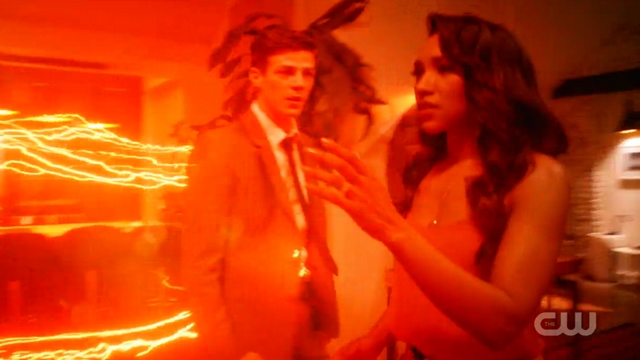 So Mr. Allen rediscovers he’s The Flash and its a joy to see him just run without a care in the world. At the same time Iris and Joe discuss this Barry. Iris admittedly is happy that he has no burdens. Joe however make note this isn’t him and in a sense a lie. Then the question of being happy based upon a fabrication arises. At the same time, Killer Frost discovers that Savitar is also with our memories. As she meets the team, things get worse — Wally (Keiynan Lonsdale) doesn’t possess powers.

In keeping up with the theme of cause and effect, we learn memory is important. As Savitar has Barry’s memories they both suffer amnesia. Because Savitar can’t remember, he in essence would have not given Wallace his powers. Thus the team finds themselves at an impasse. Help Killer Frost fix Barry’s memory, get Wally’s powers back and in turn help Savitar.  The alternative seems logical as the villain is rendered less threatening. However a city with 1 less Flash and one that has to relearn isn’t reassuring. 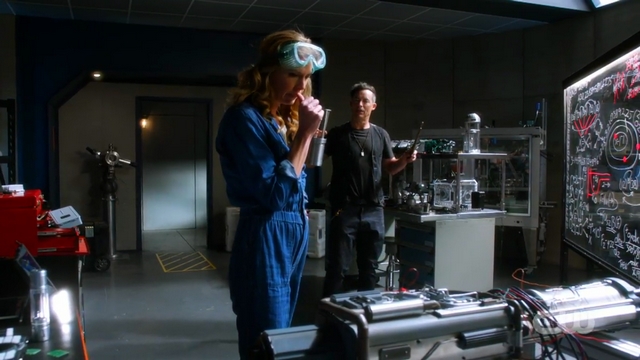 Elsewhere, soon to be Dr. Tracy and HR share a moment. After their passionate kiss she learns what’s messing from her calculations. So the creation of the speed force cannon is coming along smoothly. Yes, people getting a little aroused have done wonders this episode. On the flipside, Killer Frost, Cisco, and Julian work together to solve Barry’s memory loss. During that time Mr. Ramon tires to relive old times. However she coldly tries to disregard it all.

Before they can finish a massive fire, by Heat Monger, threatens the lives of many. Barry, memories or not, is still a hero. So he races to the scene of the giant building fire. However with no memory this is all but futile. Back at the lab, the team is ready with a device to help fleet feet. But before he can get back to the race he needs a strong jolt to the brain, Thus, we are treated to the moment when Ms. West & Mr. Allen feel in love as children years ago. 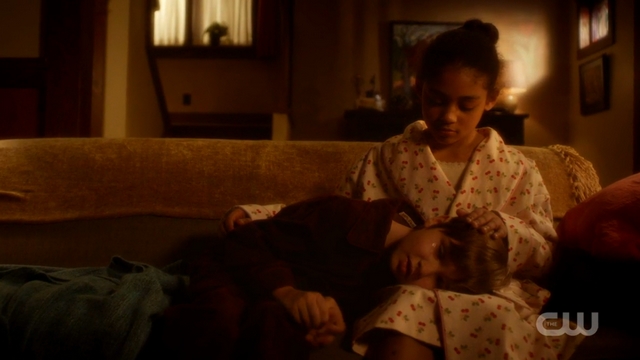 After the very touching scene, our hero is back to his old self. So too is his season foe. As he moves to put out the fires, he’s joined by his young protege. After the crisis is adverted, the team tries to reach Killer Frost…again. Pardon the pun but their met with a very chilly response. She leaves after lying to everyone, claiming she never loved anyone.

Our episode comes to a close with the introduction of the speed force cannon. Well it would be an official reveal but it lacks a power source. It need as much energy as the sun supposedly. Geez, I wonder where they’ll find that? Despite Savitar’s less than solid origin explanation, the different faces of Grant Gustin ultimately made this a fun episode.

Despite a disappointingly revelation of why Savitar exists, this episode offers a rarity. We get to see the Grant Gustin take on the role of villain, known hero, and new man. The run offered a good mix of humor, drama, and fun.