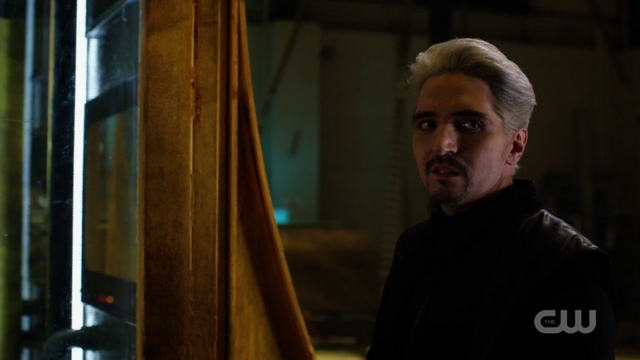 Spoilers coming at mach 3 or 4? Any who this week’s Flash episode had a quick start. Our episode opens up at Stagg Industries. Two unknown security guards are greeted by a mystery man. He seemingly uses magic to steal some tech and gets away. Thus we are introduced to Abra Kadabra (David Dastmalchian) in less than 5 minutes no less.

Barry (Grant Gustin), Iris (Candice Patton), Joe (Jessie L Martin) and Cecile (Danielle Nicolet) are enjoying lunch together. They talk about how they got engaged and so forth. The conversation gets uncomfortable when the couple gets invited to an event in the Summer. Iris’ death and the future still hangs into the air. Our favorite detective and CSI team find themselves at the crime scene. Unfortunately when a murder/theft goes down within a tech company, they keep quiet. 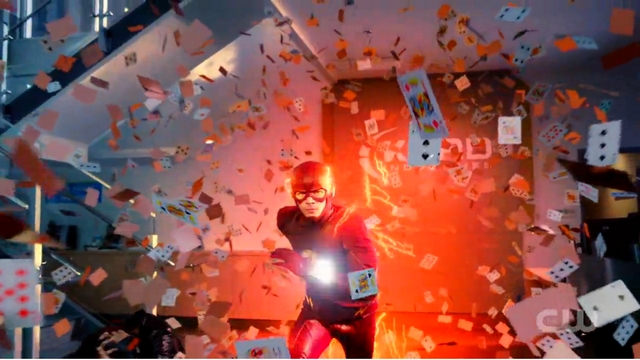 As they try to piece things together another tech robbery goes down. BA arrives to meet the magic man. The meeting gets pretty weird as he reveals he’s from the future. I’m losing count how many bad guys have been from the future. He also knows Barry’s name and the details of Iris’ death. I mean sure…everyone has spoilers now too. True to that end, he also let’s loose he knows who Savitar is. Well now, that’s some secret you have their sir! He manages to gives the Scarlet speedster the slip. Just before he escapes, Gypsy (Jessica Camacho) comes in for some sweet justice. However even this isn’t enough as he gets away scott-free.

Back with the team, everyone is informed our baddie is from the 64 century. Also he’s magic act is purely scientific and via nanotechnology. Its so advanced all his acts appear to be magic. He also had crimes in Earth-19 and thus has earn a spot on Gypsy’s immediate attention list. The team mulls over the fact he’s a lead to the clue of saving Iris. Meanwhile, Cisco (Carlos Valdes) and the collector try to drum up ways to locate him things get…interesting. However they become highly awkward as she brushes off his advances. Yep, weird, something is a foot but what? 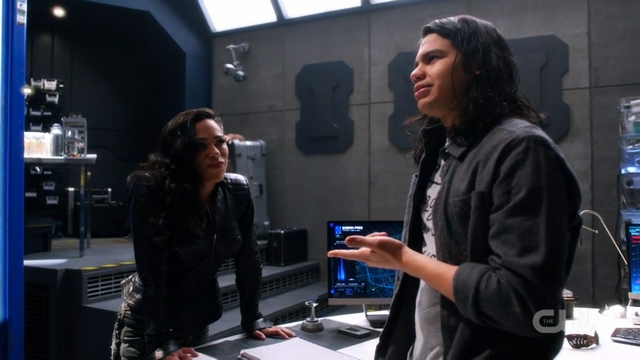 Everyone gets notice that he’s attempting another robbery. Vibe, KF (Keiynan Lonsdale), Gypsy, and The Flash arrive to stop him Unfortunately it’s smoke and mirrors via a hologram. The magician used that diversion to crashes Star Labs party. Before he gets what he wants, Barry is able to catch him. So his capture is a sketchy matter. He offers everyone the following; if he’s freed he will reveal Savitar’s identity. If he returns with Gypsy he’s dead as punishment for his crimes. Its tempting and there’s no denying that. However he has crimes to answer to.

During this time, Caitlin (Danielle Panabaker) is patching up a hurt Julian (Tom Felton). They manage to smooth things between each other. So things aren’t so frosty anymore. Anyway, everyone is thinking about what they should do. Mr. Allen and Ms. West discuss the matter seriously. She reinforces the more saintly understanding; it would be wrong to let him go. Her life isn’t worth the many affected by Adra Kadabra. During these feelings of uncertainty, Joe visits the criminal. He alone is willingly to let him go. Joe’s actions are fueled by the single need to save Iris. It’s totally logical and crazy. 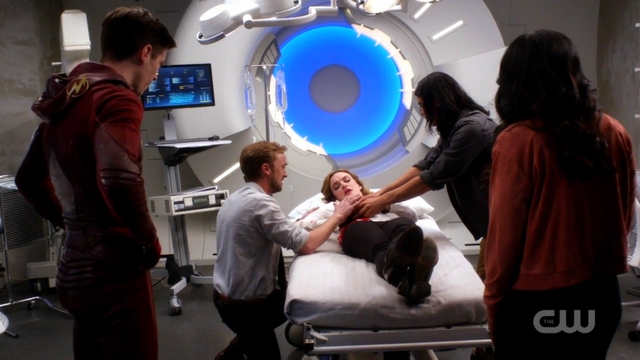 He frees the future foe but Gypsy’s appearance allows him to run. He steals tech from the Time Vault and in the midst of the chaos, he knocks out everyone. While everyone regains their senses, Caitlin is seriously injured. She has shrapnel close to the kidney and is likely dead if nothing is done fast. So the team is freaking out! She proposes the craziest thing ever. Again, this is a show that has a 20 something that can run faster than the speed of light. She wants Julian to operate on her while she instructs him. The alternative is that she become Killer Frost to heal herself. However she would rather die than resort to that. They never really have it easy.

Gypsy and Joe discuss his misguided sense of justice after what transpired. Joe stops her acquisitions of letting the  magic man free. He makes it vehemently clear that his family comes before justice. Cisco walks in after this fun chat and asks her what is really going on. During Abra Kadabra’s time on Earth-19, he actually gunned down someone very dear to Gypsy. So, she’s driven to bring him to justice for his sins. 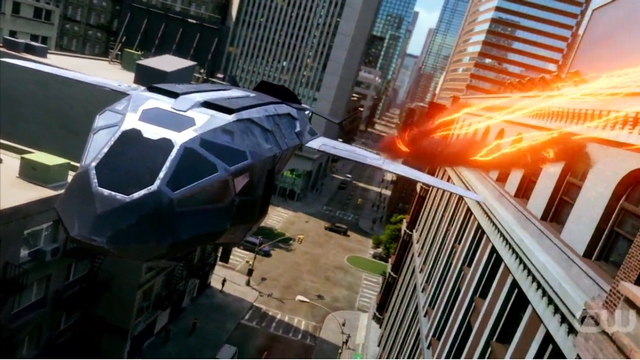 Back to Caitlin, Julian and team go through her crazy plan. She directs him to the shrapnel and he manages to save her. Again, she was awake during all that pain, yikes. Afterwards, we discover that all the tech that’s has been stolen across the Earths is to build a time machine. A time machine much like the one built in season 1. A plan is created to stop him from escaping them forever. Of course, Barry has to convince Gypsy to trust him…again

Our futuristic villain readies a portal in the middle of Central City. However before he ca fly home free, the heroes some up to stop him. What happens over the next few minutes is pure comicbook antics. Vibe and Gypsy disorient his flight path and the rest is left to the speedsters. Wally and Barry make moves to stop his aircraft. Eventually, the only one left is our titular hero to save the day. In an impressive feat he stops the phony magician’s escape. 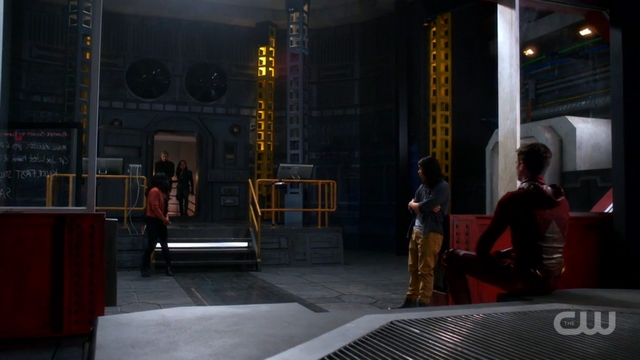 Back at Star Labs, everyone is still carrying a heavy heart with the fact Savitar’s identity is so close. Before returning home, Barry let’s Gypsy leave with Abra Kadabra. Before this happens however, he begs him to reveal the evil speedster’s name. He tries to appeal to his human side. What happens instead is that he tells Barry he enjoys the fact he will cause him pain. So essentially, the bad guy has the last laugh.

Speaking with Joe and Iris, Barry reveals the obvious issue regarding their present. He vows to visit the future to gain intel to help them. Next, Caitlin recovers from her surgery with Julian by her side. They share a tender kiss and warm feelings. He’s so dead, by the way. As she enjoys the company of her friends she starts flat-lining. They do everything they can be nothing works. Before he can even bare it, Julian removes her power dampening necklace.

Her powers heal the injuries immediately and but our episode ends as she violently awakens as Killer Frost. 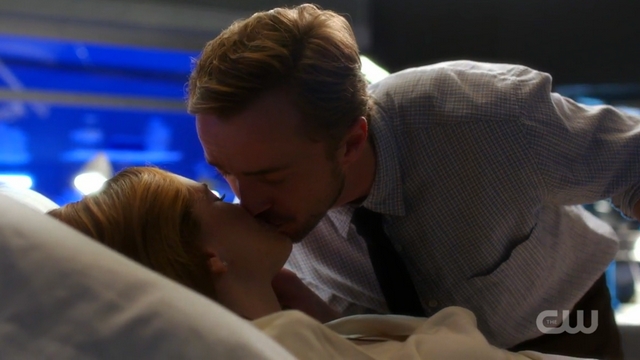 This was easily one of the better episodes this season. It had a motivated villain, that was active from the moment he was on screen. We had a very motivated ally burning with revenge. The cast was also able to interact very well together. There was hardly a wasted scene in this episode as well. We had a good dash of moral dilemma and in the end the bad guy wasn’t the real loser.

This season was strong from start to finish. The villain was grandoise, multiple issues were addressed by narly everyone. In the end it feels like we still lose?