From Fandom with Love: Octopussy 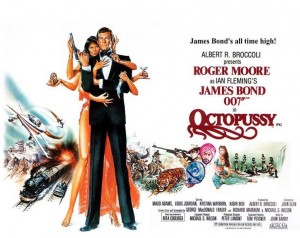 We have reached the end of the Roger Moore era, at least as far as we are concerned, he would go on to do one more Bond film, but we’ve already covered that. This would be Moore’s 6th turn as Bond, and one of his better movies, though it does have some questionable material.

It would also be the first, and to my knowledge only, time that a film re-uses an actress as a Bond girl. Though she gets a lot more substantial role in this film (including the title of the film).

Let’s get on with this show!

Once more we turn to Wiki, who does a better job of simplifying the plot:

Bond is assigned the task of following a general who is stealing jewels and relics from the Russian government. This leads him to a wealthy Afghan prince, Kamal Khan, and his associate, Octopussy. Bond uncovers a plot to force disarmament in Europe with the use of a nuclear weapon.

The movie is most noticeable though for an extended circus scene which sees James Bond literally dress up as a clown. One of the series’ true low points.

After some less than ambitious plots in the previous Bond movies, we get one that’s a bit more multi-layered and features double-crossing which is always a positive.

The plan is actually two-fold. It deals with Kamal Khan acquiring rare treasures. Having them replaced with fakes, and smuggling the real ones through Octopussy’s traveling circus. He is using the money to fund a secret war between America and Germany.

Along the way Khan double-crosses Octopussy and attempts to blow her up along with the rest of the circus going population.

The plan is still simple, but a bit more complex than most Moore-era schemes. It also helped that his endgame is a lot more grand than recent entries in the series.

Kamal Khan gets a 00-Agent status.

Magda- Bond has all the luck with the ladies it seems. For the most part, they wind up dead or trying to kill him. In this case, one uses him for sex, steals from him and THEN tries to kill him. You know.. ROMANCE. She does eventually meet her maker. DEAD 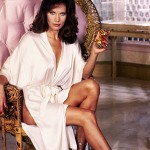 Octopussy– For as long as this series goes on, Octopussy remains the only Bond girl to have a movie named after her. Sure, The Spy Who Loved Me could have referred to the Bond girl, but it could have just as easily include Bond himself! Unlike most Bond girls, Octopussy also gives off this energy of being mature and wise and knowing what she wants and how to get it. While there have been tough Bond girls, and smart ones and charming ones, I feel like Octopussy was something special. She does end up bedding Bond in the end. ALIVE 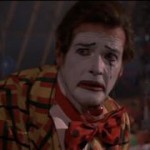 For once, I’m going to reverse the Bond-ism and speak of the lowest point of the Bond franchise for me, which is literally turning Roger Moore into a clown. I’ve made note throughout most of Moore’s tenure as Bond that he was played a bit less serious than Connery or really any other Bond, but to turn him into an actual clown was just… ARGH!

The opening sequence starts off fairly mundane with Bond trying to sneak into some place before being busted fairly quickly. He is taken captive, but escapes when they try and transport him. He ends up in a fold out airplane and outmaneuvers a heat-seeking missile. I mean parts of it sounds exciting, but really didn’t do much for me.

All-Time High is an okay Bond song. It doesn’t really break from traditionally sounding ones for the most part, but it works. It should be noted, the first theme song to officially not include the title of the movie in it. While The Spy Who Loved Me’s theme had a different title from the movie, Nobody Does it Better, it did include the actual title. All-Time High as far as I can tell never works in Octopussy. We wouldn’t see this again until Casino Royale.

The opening credits seems to be the most 70s of the Bond era, which is quite ironic since the film actually came out in 83. It makes heavy use of tye dye coloring and neon lighting (that’s mostly an 80s staple). And it really features women, which isn’t something that all of the Moore era films did well.

Other than that, I don’t think this intro works any central element of the film into it. There are random, but not many, shots of like a multi-armed Bond, which works with the title but that’s about it.

Octopussy is a tough film to rank. It isn’t Moore’s finest hour, but it isn’t a terrible film by any stretch of the imagination. It does have a tendency to drag at certain parts, and like the next film, Moore’s age really does hamper some scenes, but it’s good fun. If you want to see a random Bond film, this would be inoffensive.