From Fandom with Love: License to Kill

If not for George Lazenby, Timothy Dalton would have the shortest tenure as James Bond. After making his debut in the fun The Living Daylights, Dalton makes his departure in the next film, License to Kill. License to Kill is an interesting movie among the Bond legion. It is either loved for bringing a hard edge back to Bond or despised for being so well grounded. For a Bond film, there’s very little in the way of exotic locations, gadgets and the likes. 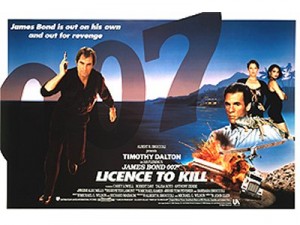 For me, I feel like License to Kill is a Bond movie before it’s time. A lot of the things that Daniel Craig and Casino Royale get praised for are on display in this film as well. A Bond who is more brute force than suave spy is here. A story that’s fairly grounded and not grandiose is also on display here. Unlike Casino Royale though, I also think this movie has an interesting villain and henchmen dynamic.

More importantly though. Dalton brings a deadly side to Bond that very few actors have before or since. While Connery always looked like someone you didn’t cross, he had his comical moments as well. We’ve already noted that Roger Moore turns into a clown. Lazenby spends half his movie in a skirt (yes, I know it isn’t!) and we haven’t gotten to Brosnan yet, but he plays a more suave andÂ sophisticated Bond than cold-blooded killer. I feel like a lot of the qualities that Craig gets praised for now, is what people kind of disliked about Dalton, which I always found funny.

Yes, this is a dark film for the franchise. One of the few to show blood on screen, and even have some rather graphic deaths and torture scenes, but it still has some of that Bond charm though not as much as the rest of the series.

Anyhow, let’s get to the breakdown.

Wiki has a tiny summary on this movie, let’s get that first:

The film sees Bond being suspended from MI6 as he pursues drugs lord Franz Sanchez, who has attacked his CIA friendÂ Felix Leiter and murdered Felix’s wife during their honeymoon.

This paints the broadest of picture for the movie, but actually does a good job of telling you all. The film for the most part is a tale of personal revenge, if it is perhaps the most grounded Bond films to date. Not just because it is a more personal tale for Bond, but also the villain doesn’t have a grand scheme, but it works, and we’ll find out in a second.

There also isn’t much in the way of globe-trotting in this film. Most of that is simply due to the fact that the film crew didn’t have the budget, but it does work into the plot. Sanchez isn’t a guy who is allowed or able to go to many countries because of his reputation, and even the start of the film. And it’s always nice to see Bond have an early target, and actually have to use more skills than his brute force and guns to achieve his goal. 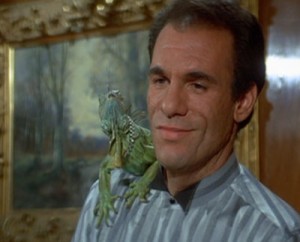 In the past, I have giving villains grief for not having grander schemes, but usually with some additional details surrounding it. Perhaps, the scheme wasn’t grand but it also lacked any type of fantastical element to it, or perhaps there were just too many parties involved. Or in those very rare cases, it depended on Bond to be truly successful.

Sanchez doesn’t really have a grand scheme. This movie isn’t about him. It really is Bond’s film. Instead, Sanchez is actually fairly successful at the start of the film. He has his drug empire. He has a clever cover system using the telethon to note price and allow his customers to make their purchase. He is only looking to expand his organization, which really isn’t a grand ambition.

He gets a 00-Agent status because he has already succeeded. Which is rare for a Bond villain. 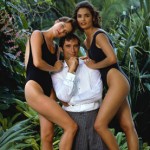 After The Living Daylights featured only one Bond girl, they decided to double their efforts in this film. Most interestingly about this development though, is that this is the first time that they introduced a love-triangle aspect to the franchise. Generally, Bond ends up bedding a few women per film, but they don’t generally interact with each other nor do we actively see jealousy on them, but we get both here. Anyhow!

Lupe Lamora– We have seen Bond girls who serve as a love interest for the main villain, but we haven’t really seen any in an actual abusive relationship. And that’s exactly what we have with Lupe as the film begins with Sanchez risking capture to retrieve her, and brutally beating her. After that, she is pretty much held as a prisoner in various setting for the rest of the film. Not an actual prisoner, she is free to walk around as she sees fit, but can’t go anywhere on her own, and just kind of mope about. Bond does use her for information when he gets a chance, and eventually she is freed when Sanchez and his operation goes up in flames. She doesn’t end up with Bond, but she remains ALIVE.

Pam Bouvier– I noted before that in the late 70s/early 80s there was a movement to have stronger, more independent Bond girls. We saw that with Havelock in For Your Eyes Only and with Octopussy in Octopussy, Pam Bouvier continues that tradition. While Bond sees her earlier in the film leaving Felix’s office, the first time he really interacts with her is inside of a bar, and they actually get into a bar-room brawl. This is a first for the series as far as I know. She is handy with a shotgun, resourceful, cunning and very beautiful. She is also one of the few Bond girls who doesn’t get kidnapped during the film and needs to be rescued by Bond. She does have her insecurities especially when it comes to Lupe, but she is a fun and strong Bond girl for the most part. ALIVE

I’m going to have to cheat once more. While Bond has his moments in this film including “paying” back a friend. My favorite moment/Bond-ism in this film actually comes from the villain. Who is kind enough to leave a note with Felix Leiter that simply says, “He Must have disagreed with something that ate him.” after feeding most of him to a shark!

Starting with this film (or even the previous one), the Bond crew just knew how to nail the opening sequences. They are high-octane a ton of fun without being over the top and silly. This one is so memorable in fact that Christopher Nolan took some inspiration when making The Dark Knight Rises (or at least he tries to!).

The film starts with Bond and Felix in a limo on their way to Felix’s wedding. When word comes in the Franz Sanchez is in the Bahamas and it is a rareÂ opportunityÂ to actually capture him. Bond and Felix are off on a chase, but Sanchez is ahead of them, and is able to escape in a tiny plane. That however doesn’t stop Bond, who decides to go fishing in a helicopter and is able to hook Sanchez’ plane before he hits international waters.

The intro is just a ton of fun with an amazing stunt to finish it off.

After some more rock-heavy Bond theme songs, we return to something more akin to the love ballads of earlier movies, but this one still has an energy about it that makes it pop a bit more. Perhaps, it’s Gladys Knight’s strong vocals that brings a much needed life to this type of Bond song.

What is interesting about this song though, is they somehow managed to turn the concept of a license to kill.. to be about love. Yes, Bond does love and he does kill. He hardly ever kills for love though, but here we are!

I was often times confused about the visual motifs for this intro. It focused heavily on pictures, and KODAK (Which I assume was their subtle product placement), and it never really clicked for me until I had to write about it. They were focusing on the sequence when Bond gets his camera sniper that he is going to use to take out Sanchez before.. the ninjas appear! So it does have a clear basis in the film, just a very odd sequence to pick up on.

The other stuff deals with a casino, and that’s a lot easier to read. Also, it is done better several years later in Casino Royale! It is a visually fun intro though. By this time, it was mostly experimentation because they had the formula!

License to Kill is a very divisive fan among Bond fans, but I will go on record to say it is one of my personal favorite films in the franchise. I would go a step further and say depending on the day you ask me, it is often times my favorite film in the series. It is such a radical departure from the norm that you can’t help but love it. It has this rough and tough edge that just captivates me. Dalton is amazing in the role, and you can see him doing a lot of the stunts that Bond performs here.

The main villain is a blast. He isn’t over the top. He doesn’t have a grand scheme for world domination. he just wants to make money, and will cut down (literally) anyone or thing in his path. The Bond girl is smart and sexy and she can act (which is a big plus at this point). The score, which we haven’t mentioned much of for any movie, is one of my personal favorites. Part of it is that someone else took the reigns while John Barry was out sick.

From top to bottom, it is a fantastic movie. And comes HIGHLY recommended from me.