Forever Evil may be a new marketing term for comic events. Promising grand ideas and sweeping destruction, they more often than not serve as a way to part their customers from their wallet. But before I get too cruel, let’s see what happened in Forever Evil 5! 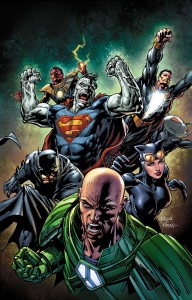 This issue starts where the last ended with Sinestro taking the fight to Power Man and the Crime Syndicate’s Earth partners going after Batman, Catwoman, Lex Luthor and their team of villains. The fight and action is pretty fast and brutal here with characters on both sides of the aisle coming up short. If nothing else, I will grant this series a high body count. Now if it were characters we’d cared about, may be more impactful.

Due to an event in this issue, the big BIG bad of the series is “revealed” as it leads into the cliffhanger of the issue.Â This issue attempts to shake it up a bit as the major players begin to make the moves which should lead to the climatic battle, but it still doesn’t feel like a lot is going on.

We are now 5 issues deep into Forever Evil (which only plans to be 7) and about 6 months since the release of the first issue, in that time not a ton has happened. The biggest gripe I’ve had and continue to have with Forever Evil is that since issue 1 the stakes haven’t changed. They haven’t gotten better or worse for the heroes or villains, it has remained fairly stagnant.

Review 3 (out of 7): This is a tough score to give. The issue itself is fine. A decent read. Great action. Art remains solid. But at the same time, I can’t recommend it for being part of a series so intent on dragging its feet before it becomes interesting. If you are along for the ride of Forever Evil, it matters not. If you want to know if it’s worth jumping into, I would say no!