Welcome dear adventurer. Off to fight the deadly hippopotamoose of Lubrication Hill are ye? The hell you aren’t with that flimsy splinter of metal you call a sword. Old Pottamoose would use it as a toothpick after devouring you, scanty tunic and all. (Seriously, could you cover up your man-bits a little better?) What you need to defeat Old Mooser McHipster is a bomb. More precisely an

A Rare Hippopotamoose in action

First, it’s off to Ireland for you. Buy yourself a cow upon arriving and ride Bessie over to the brewer by the name of Bailey between the hours of 2 and 4 am. If I know him (and I don’t pretend that I do) he’ll be out about town pimping his troupe of hookered up leprechauns to the horny masses. Squeeze Bessie in and dump her like she was a bran muffin. Into the brew that is. Now here’s where you can get creative. You’re going to need to mash the poor bovine till only dental records would identify her. Knowing Irish cows (and I pretend that I do) she hasn’t been in a dental practitioner in quite some time so you’ll undoubtedly be safe if you get out of there before 4am or else you’ll have some little STD-ridden green folk to deal with. That’s not gold at that the end of their rainbow if you catch my drift. Bottle up some of that juiced moo and you’ll have Bailey’s Irish cream.

Off to Estados Unidos Mexicanos. While there chug a sickeningly intolerable amount of sugar and make your way over to a coffee plantation, popping coffee cherries into your mouth hole before succumbing to a diabetic fit. Upon waking, scoop up any….discharge….you might have expelled during your sugar fueled night of–if I had to guess: raping piÃ±atas. (You just seem the type). Huzzah, you acquired Kahlua.

A hop, skip, and a swim over to Jamaica. You’ll find a little coffee house run by a Miss Tia Maria. Kidnap Tia Maria. You now have Tia Maria. 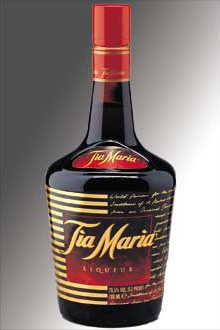 The final ingredient is vodka. Head to Russia and turn on any faucet. Ta da. You got vodka.

Mix an oz of each over ice and stir with your stupid little sword. Go blow that hippopotamoose to smithereens. He owes me money.