A round-up of some of the comics I read this week. 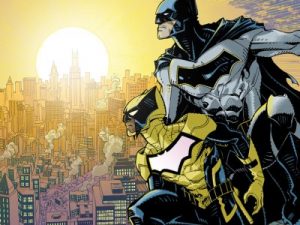 Gotham has no shortage of superheroes so finding a way to carve out an unique niche with new supporting characters and villains is no easy task, but by the end of issue 1, we get all of that.

First, Duke is a rare member of the Bat-family to have actual superpowers. Something that has been teased with various members before and technically Gotham Girl, but she doesn’t seem to hang around as much. But what makes him different than other metas is the fact that he was properly trained by Batman before developing his powers as well so he has some of that in-built street smart and combat skill in addition to his powers. His powers also appear somewhat unique, in that they don’t seem offense or defense based, but knowledge based. I could be reading it wrong, but it seems that Duke is able to see certain light sources from people and object. Sort of like a personal VCR to collect an image, rewind and fast forward based off movement of the light. We’ll see how it develops.

As for the story, a lot of it deals with Duke being given the mission as “The Signal” by Batman and introducing his new supporting cast including some of the kids from “Robin, Inc” which was great to see. There’s a juvie Arkham and even a new cop for him to buddy up with on the day shift. Sure some of it literally seems like Batman in the day, but also feels fresh.

That is largely due to the comic being set during the daytime and actually getting to see parts of Gotham in broad daylight. The artist does a good job of showing that the city isn’t nearly as gloomy during the day and that’s even reflected in some of the exchange Duke has with citizens who accept that the crazies come out at night in Gotham.

Review: 6 (Out of 7) – A refreshing, but familiar start for Gotham’s latest hero.

Some comics are for entertainment. Others punch you in the gut like a world-class boxer. Black Lightning: Cold Dead Hands has been one of those minis that have managed to knock me back issue after issue. 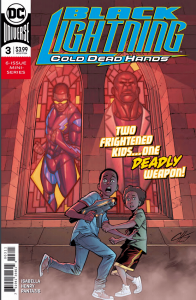 The series doesn’t bother trying to codify it’s message, it tackles police brutality/shootings, especially in regards to black culprits, head on. The issue even begins with a father and wife being gunned down by a cop during an attack by a supervillain. The cop can’t come up with a “clean” story to tell as to why he pulled the trigger, but the damage had been done. Worse yet, the parents two kids escaped and instead of trying to bring them in peacefully, they are labeled armed and dangerous which gives the issue a sense of urgency as Black Lightning rushes to their aide hoping to prevent another incident with two young black boys.

Though the comic doesn’t paint the issue as just black and white as two of the people who help Black Lightning in his mission happen to be cops as well. And his mentor was a former criminal-turned-soldier-turned mentor. A collective can be black and white, but individuals are a lot more complex and any single situation needs different practices.

In-between the heavy message are also some beautiful scenes including a church funeral and Black Lightning trying out his new costume. Those panels in particular are eye popping. If nothing else for making the same ole costume look exciting in its re-reveal. I don’t know why but his costume’s colors also just pop off the page for me. It gives every panel he is in life… well sans his stealth mode.

Review 7 (out of 7) – A series that has been at the top of its game for 3 straight issues.