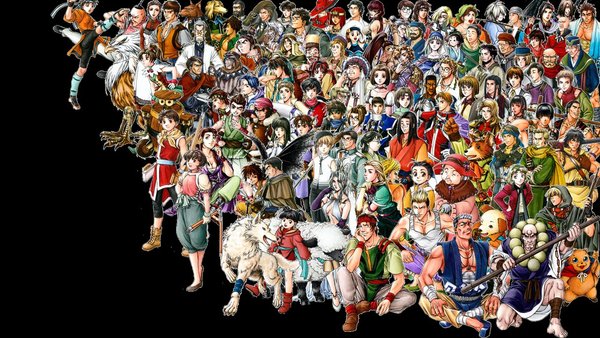 What RPG game do you think has the most diverse and interesting cast of characters?

Firstly, I think there are two very different questions going on here. Diverse and interesting are pretty different adjectives as far as English language semantics go, and I’m not sure that the best RPG casts are known for being solely diverse or solely interesting. Really, the ideal cast would be diverse enough to create a feeling of variety and choice for the player, but interesting in the sense that each character has real depth. In my opinion, it is the intersection between these two elements that creates the optimal cast experience (but I’ll get to that in a bit).

If I were to look at the most diverse cast, meaning the cast with the greatest number and variety, I’d have to give props almost solely to the Suidoken series of JRPGs. You see, each main game (excluding the Suikogaiden and Tactics titles) has exactly 108 recruitable characters in their casts, known as the 108 Stars of Destiny. Not all of them are usable in battle, of course, but all offer different personalities and bonuses that change the course of the story in some way. That being said, there isn’t a great amount of depth to these characters, outside of your protagonist, as we can’t spend a ton of time getting to know them without the narrative suffering as a result. Sadly, this means they all lack in intrigue despite being quite varied.

Then there are games like Persona 4. Persona 4 has one of the best casts I have seen in any RPG series. Each character has unique motivations, weaknesses, verbiage, and designs. It really feels as though the creatures took a lot of time and care to make the cast relatable and interesting. By the end of your first playthrough of the game, you’re likely to think of your party as friends as opposed to characters. And that’s great. What isn’t great is that there are only a handful of characters that fit into this category. The cast, including the few well developed NPCs, is under ten individuals so you’ll get to know everyone pretty well pretty quickly. If only we had a cast that was full of depth and numerous.

The answer is Final Fantasy VI. Final Fantasy VI (or Final Fantasy III in NA, for the Super NES) is known for being a great all-around RPG, but the cast is really where it shines. It has a narrative that ties everything together, but the real bulk of the story actually comes from numerous character arcs which have been carefully strung together. If you can believe it, the game has twenty PLAYABLE characters, each with their own unique design, personality, parlance, and arc. There are also a good number of well-developed NPCs and antagonists. Because the ensemble cast basically IS the story, and there are so many of these unique individuals, I honestly can’t think of a game that has a better all-around cast.