The 4th film in Marvel’s Animated line-up isn’t one I would have expected after two Avengers films and an Iron Man film… we get a Doctor Strange film. I’ll give it to Marvel, they were at least giving their characters a chance, and who knows it could work.

Marvel March is rocking and rolling with the Sorcerer Supreme, Doctor Strange! 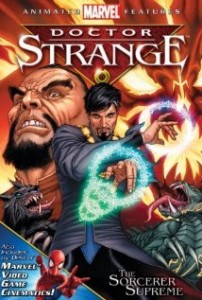 Instead of repeating things I’ve said roughly 3 times in a row now, I wanted to touch on why I feel this film and many of the Marvel animated films have failed so far.

The first is they are so busy on trying to give fans an origin tale that is true to the comics that they fail to make it entertaining as well. I get why they would feel its important but when you are working with roughly 70 mins or so of screen-time, you could expedite the procedure just a bit. Instead this film, the same as Ultimate Avengers and Iron Man, spend too much time setting up the character before putting them into the role we came for. It’s probably a good 50 minutes or so into the film before he becomes THE Doctor Strange we wanted to see.

Secondly, is being so slavish to the comic book script. While, this isn’t a direct adaption of any one story it does stick to Doctor Strange’s origins pretty damn closely. If you leave very little new for the audience, these long origins just seem even more bland and time-wasting because its nothing new and exciting.

Finally, and I couldn’t go without talking about this again, the animation just looks cheap. I still haven’t quite put my finger on it but their studios just seem to create these lifeless images that they’ve got to move every now and then. On the bright side, I think this is the first Marvel animated feature with at least a few standout voice performances including Kevin Michael Richardson as Baron Mordo, who I really dug in this film.

Ultimately, the Marvel Animated films haven’t been bad, which I would have preferred actually. Instead, you get these completely bland and forgettable movies. Let’s hope the next proves to be entertaining!