After announcing the formation of the DC Nation block in April of this year, Warner Bros and DC have been quite quiet on the front. That was until today when they hosted a keynote event in France. 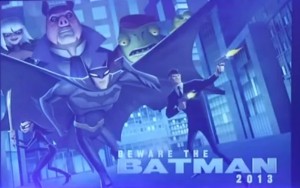 The first and probably most important is the official announcement of a new CG-based Batman cartoon to debut in 2013. (If you are keeping count that means 2012 will be the first year without a Batman/Batman-team show on the air in over a decade). The show is called Beware the Batman, and unlike Batman: The Brave and the Bold stars a more classical look Batman. Batman will be joined by a gun-touting Alfred, and a female sidekick in Katana. According to DC, while she will fill the sidekick role she will not be replacing the Robins/Batgirls of the world.

The next piece of news is that the DC Nation block will debut in spring of 2012, and will feature Green Lantern: The Animated Series (the new CG series) and Young Justice as their premiere content. The conference includes an extended look at the Green Lantern cartoon, if you wanted to see how it looks in motion, and get a feel for some of the voice-cast.

In addition to Green Lantern and Young Justice, the DC Nation block will include shorts, which will run about a minute or so in length and pull from DC’s rich history of characters, and in-studio/behind the scenes bits that allows you to see what is going on in the world of DC Comics. 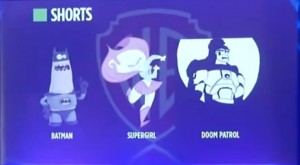 The shorts will feature different styles of animation. As you can see from the poorly captured image here, the first style (the Batman) is the Aardman Animation shorts. The second one comes from the creators of My Little Pony’s Life is Magical, and will be a short that features Supergirl, Wondergirl and Batgirl called Super Best Friends Forever (SBFF) and finally Doom Patrol will have its own featured shorts.

After the presentation they showed a sizzle reel, which included news that there will also be an Aquaman short, and it looks like DC is continuing work on the live-action Blue Beetle TV series, but we shall see.

So for this and more, check out the panel below!