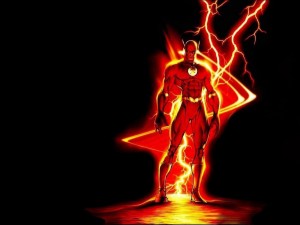 First off I know this wouldn’t happen because I want to take the show Arrow and use aspects of it, which could confuse people who don’t watch it or the none “hardcore” fans. Basically I would use the show for an episode or two to kind of set up the movie. Barry Allen is a good friend of Oliver Queen. Barry is a successful scientist that has always put others before himself. He wants to be his own hero which is why he works in the forensic department of the Central City Police Department, where is getting paid way less then what he is capable of making. Barry and Oliver where friends growing up but lost touch when Barry moved to Central City before High School. When Oliver came back from the island after time him and Barry became good friends again. We learn that Barry has a serious girlfriend named Iris West and is happy with how life is going. Oliver tells him he is Green Arrow and that a few of the run ins he has had including DeathStroke. This is where the movie begins.

Barry calls Oliver telling him that they have issues in Central City with an assassin killing several lawyers and judges trying to make the remains of Superman’s ship public knowledge. One witness said this person is trying to steal items for his employer. Oliver realizes that it could be DeathStroke and helps Barry try to stop him. Barry gathers evidence while Green Arrow hunts for DeathStroke. Barry presents the evidence as Oliver is able to capture DeathStoke with unusual ease. The capture gains Barry some fame, and the government knows that Barry had help from Green Arrow. They decide to ask Barry to work for them, which Barry accepts. 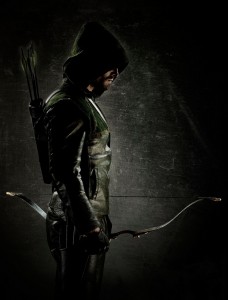 Barry working for the government allows him to earn more money and he begins to move his relationship with Iris further, when he gets a new apartment with her. Barry’s first day at the new very secure government lab, brings him to where they have stored Superman’s ship since they took it back from STAR Labs. Barry said he heard it was at STAR Labs but his coworker Adrian Zoom tells him that after Clark Kent wrote the article about the experiments LexCorp and STAR was doing the government stepped in and took it all from them and moved it here. Over the next few weeks, Barry gets very involved in his work and helps the government advance human technology using the Krypton technology. Adrian believes that they are doing great work here, but feels they need to create technology to stop the heroes if they ever turned against humanity. He tells Barry that if he was a hero he would help the government in any way possible to stop any threat and be the best hero ever.

One night after Adrian leaves Barry is just finishing up and picks up one of the green rocks near the Superman ship, which Adrian calls Element K. Barry notices that its storming outside and that his ride home will be slow. As he turns to set the rock down lighting crashes though the window hitting the rock which travels though Barry and knocks him out. Adrian heard the crash and rushed in to see Barry getting up and asks him what happens Barry says he is fine and leaves, Adrian sees the rock on the ground and puts it away before leaving.

Over then next few weeks we see Barry using the powers he has gained, Super Speed, High Endurance, Quantum Tunneling (vibrate though walls), Invisible aura allowing his body to be safe traveling at high speeds, and the ability to hear minor wounds faster. He calls Oliver and they meet to discuss what happened. Next we see Oliver training Barry and giving him hero advice. Barry starts saving people in Central City and finally dons his costume after Oliver says he should call himself Yellow Lightning, Barry laughs and says think of something better ill be back in a “flash” to which he returns with a thug and says I like the name Flash. As Central City now has its own protector, Flash is all over the news. Green Arrow gets news that DeathStroke has escaped. Oliver calls Barry and tells him to be on the look out and that rumor is that STAR Labs has hired DeathStroke to bring parts from the ship from the government lab back to STAR Labs. 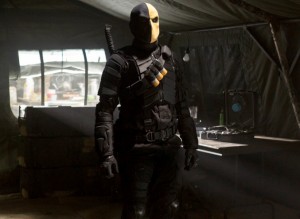 Oliver tells flash to begin looking around the city and that he will go to the lab to watch over everything. We see flash running around trying to find DeathStroke. Meanwhile, Adrian is in the lab frustrated knowing Barry is the Flash. He is trying to liquidize the K element so his body can take it for fear that the amount of electricity would kill him. He wants to have powers and be better then any of these new superheroes. Oliver gets into the lab and is hiding when he sees Adrian take the vial of K about to drink it and fires and electric arrow causing Adrian to spill the liquid on himself and get electrified at the same time. As Oliver approaches Adrian in walks DeathStroke who fires at Oliver. Barry of course arrives right after. And is about to take DeathStroke down when Adrian always and knocks Barry down. Everyone confused by his sudden power, DeathStroke reaches for the K as Green Arrow fires at him. Barry meanwhile goes after Adrian who seems to have lost his mind and beats Barry down again. The Flash who DeathStroke sees is struggling is about to fire at, as we see in arrow go though his head. Which of course Oliver has fired. This causes Adrian to run off.

The scene fades away, and we are in a darkly lit room. A man opens the door what appears to be a yellow flash costume. He says, “I know you had a contract with DeathStoke to bring you Element K. So I wanted to bring it to you myself to let you know you can trust me.” A bald Lex turns around and says, ” Zoom, you have made my a happy man, thank you for the Kryptonite.”

Let me know your thoughts below or on twitter (@joshraj9)