It looks like DC is finally playing ball with Amazon as the first of its books have appeared to join the Comixology Unlimited program. Which means for a flat fee of just 5.99/month. It’s a great offer for fans, but it does beg an important question… why now? 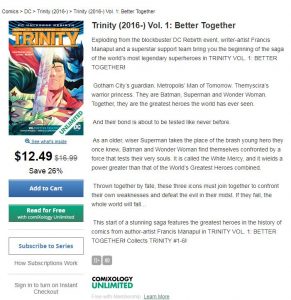 DC has just launched DC Universe a few months ago, and one of the perks of that service was access to thousands of DC Comics, past… and mostly past right now. So why undercut a service still in early infancy to partner up with Comixology after years of regretting it?

I guess we’ll find out the answer sooner or later, no official press release has gone out but the first of the DC Comics have appeared on the service including 2016’s Trinity. Can check out what else is offered here.