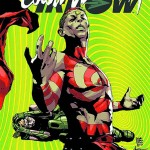 Green Arrow #23.1/ Count Vertigo #1
Written by: Lemire
Art by: Sorrentinno
Great issue. With the New 52 Vertigo is still the same character but with aÂ twist: he’s the opposite of Oliver Queen- a royal but raised in poverty,Â crafted to be a weapon, now his ‘own’ man who has decided to use hisÂ abilities for his own selfish gain. This issue we get into his origin andÂ the depths of how an innocent young boy can be corrupted and molded into aÂ villain.
Review Score: 7 (out of 7)
Â
Batman & Robin #23.1/ Two-Face #1
Written by: Tomasi
Art by: March

What I appreciate about Tomasi’s issue here is that we see a Two-Face thatÂ has often been portrayed by great writers but too often but too oftenÂ becomes a psychopath or mob boss. Here Two-Face, in the context of ForeverÂ Evil, become the dispenser of ‘Justice’ and uses his coin to determine whatÂ kind of ‘Justice’ , We still have the character who is different from theÂ rest of Batman’s rogues but true to what the character’s origin: obsessedÂ with Justice and Fairness to a deadly degree due to what happened to him.
Review Score 6 (out of 7) 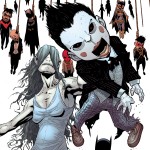 With Simone already giving us much of the New 52 Ventriloquist in Batgirl,Â she uses the context of Forever Evil to further explore her origin but alsoÂ show us the depth of her villainy and madness. A very good but disturbingÂ story.
Review Score: 6 (out of 7)

This is really a story in two parts: the origin of Darkseid andÂ Highfather(a modernization of what I seem to remember of theirÂ original origin) andÂ the story of why Darkseid is attacking parallel earths via theÂ character Pak introduced in Superman/Batman. We also have a hint to aÂ crucial plot pointÂ in a current Earth 2 storyline and a definition of what makes the New 52Â different from other earths.
Review Score 5 (out of 7)

This issue seems to be a Villain’s Month anomaly: a origin issue for a newÂ creation in the New 52. And here we get origin for a great villain: aÂ Galactus type character who is doing what fans and heroes would see to beÂ bad things, but to him, he’s trying to save lives. Unlike Galactus, heÂ isn’t motivated by hunger, but instead by knowledge and a want to saveÂ lives.
Review Score: 7 (out of 7)

This issue seems to be getting a lot of controversial buzz but I for oneÂ like the change for Cyborg Superman -not only does he get a new design hereÂ but a total new origin. No longer do we have Reed Richard like scientistÂ angry at Superman for the death of his lover and friends which is ownÂ fault. Instead we have a villain named Superman that is not onlyÂ Kryptonian but also from the House of El. we find outÂ Brainiac finds a dying Zor-El on a destroyed Argo City and changes him intoÂ a Cyborg to do his bidding (as a side note, Brainiac thought Jor was theÂ smarter brother and because he’s a jerk, makes the Cyborg Zor-El look likeÂ Zor). I think it will carry, in the future, more meaning for Supergirl andÂ Superman to have a familial connection to Cyborg Superman.
Review Score: 5Â (out of 7) 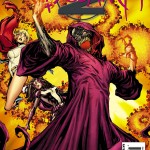 Not every book will have a compelling villain, there just aren’t enough for everyone. Desaad seemed like a weak book because it added nothing to the character. The story basically ran through the backbone of the Earth 2 series, without really advancing Desaad’s quest or motives. Art is passable and visually Desaad is a cool design, but not worth checking out the book for.
Review 2 (out of 7)Â

I wasn’t sure what I expected from the Forever Evil tie-ins, but it seems alot of books are focused on telling or re-telling the origins of some of DC’s more popular villains.

Deadshot’s origins play like a twisted version of Batman’s. He witnesses his parents and sister gunned down, he doesn’t have the money nor resources to travel the world and train, but he does find a gun and begin his quest. It was an interesting look at the Deadshot character, and the book is lucky for that as it lacks much else to really hold it together. There isn’t really a central threat or element moving the plot forward. Just Floyd reminiscing about his life and where it ultimately took him as a mercenary.

Ironically, the book does a terrific job of setting up the next arc in the Suicide Squad book. Which would work better if this was Suicide Squad.
Review 3 (out of 7)Â