When Marvel wants to refer to their rivals from Cali, they have a cute little nickname they like to use, “The Distinguished Competition,” over the past few months though I’ve come to think of DC for standing as the Disruptive Competition. While Marvel remains the market-leader, they seem to be playing the same ole hits to stay ahead. Variant covers, quick relaunches and a handful of number 1s. That isn’t to say that DC is absolved of using the same tricks to keep a loyal, but dwindling fanbase happy.

But in the past 6 months or so, DC Comics has looked to make moves that not only disrupt the industry but looks to have an eye to the long-term health of the industry. And one that seems to constantly have Marvel playing catch-up. 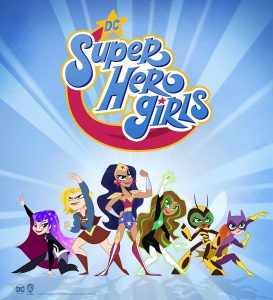 To be fair, saying the last 6 months is a bit unfair to DC Comics. Unofficially this initiative began several years ago when they launched “DC Superhero Girls,” a cross-media brand that looked to appeal to young women who may not have had an easy “in” to comics. The brand launched with a series of Youtube videos and has grown to include multiple graphic novels, monthly releases, toys, dolls and soon a Saturday morning animated series. The launch of the “DC Superhero Girls” brand has not only help raise awareness for DC Comics and its characters, but also filled the pockets of WarnerMedia.

Based on the success of the brand, DC Comics has made several moves in the last few months to cater to highly specialized groups of readers who may be turned off by or have no real way in with traditional weekly comic books. They have announced DC Ink, DC Zoom and DC Black Label. These labels each look to serve a specific demographic with standalone stories and much cheaper entry prices.

My initial interest in the first two was from a market standpoint, but since they were announced I started working at the Brooklyn Public Library and seeing how manga currently dominates the shelf for “Graphic Novels for Young Adults/Kids” I really have come around to believing that DC is trying to carve their own place in that market. The cheaper cost of entry, the smaller format, the self-contained stories, it’s all there.

DC Black Label on the other end seems to cater to lifelong comic fans, but those who prefer to “trade wait” as they get new prestige-level books and stories from some of the biggest names in the industry right now. History has also shown that they buy graphic novels in a pretty good quantity so why not throw them a bone in the whole ordeal. 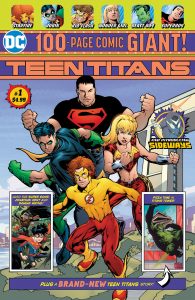 This week though, DC Comics made their most aggressive and savvy move to date when they announced a partnership with Walmart to sell exclusively 4- 100 Page Giant Comics on a monthly basis. These books would be a mixture of new and old stories from all eras of DC lore including the Rebirth and pre-Crisis stories. Not only that, but while they will focus on a single character or team, they are being used to backdoor introduce some of DC’s newer characters and stories to the world with Sideways and The Terrifics getting a spotlight.

More importantly though, these books will be sold at Walmart. Walmart remains one of the top 3 stores in America, month after month. It means that for the first time in probably decades, comic books will be put out in front of millions of eyes a day. I love my LCS, but there’s something to be said for consumers not going out of their way to a specialty store to find comics on the shelves especially as the popularity of these characters have exploded in the past decade with the emergence of the MCU, DCEU and more than a dozen TV shows.

To be the cherry on the sundae though, these books will only set consumers back $5. That is dangerous, impulse purchase territory and you get a lot more content than you would from a weekly floppy. I am curious to see how this is track because it has many of the things that I asked for from the comic industry over the past decade. It’s accessible, it’s affordable and it offers a great value-ask proposition.

Now it isn’t all sunshine and rainbows across the lines. For one, DC Ink and DC Zoom have already been pushed back from their original launch windows of later this year until early 2019. But more the DC 100-Page Comic Giant has a lot of oddly designed flaws. We’re getting books for Superman, Batman, Justice League and Teen Titans, but somehow Wonder Woman seems like a giant omission. She seems to be headlining the Justice League book, but why not give her the spotlight? It really feels like DC Entertainment has been caught majorly off-guard with the success of her movie as they have failed to capitalize on her new clout in pop-culture in any meaningful way.

Actually a diversity of characters seems to be a failing point across most of the line. I don’t mean in the make-up of gender, race and the sort (Though that is also super weak), but stuff as in the characters represented. Across almost all lines, you’ll have stories focused on Batman, stories focused on Superman, some Wonder Woman and that’s about it. If you’re lucky, you’ll get a Catwoman or Mera book, but where is DC looks at their deep roster of characters and bringing up some B- or C-tier characters to the limelight. Characters like The Flash and Green Arrow would be easy choices with their TV series. Then there’s characters like Zatanna and Black Canary who have an unique appeal and have potential to be expanded on. The list goes on, and hopefully after the initial wave does well, we’ll see more characters given a chance.

Getting back to DC 100-Page Comic Giant, there’s the fact that none of these books feature a full-story. Like I get it, comics are a serialized business and each book will have a new and original story. But 100 pages, and you couldn’t include ONE story in each book that began and ended in the same issue. Then the rest of it wouldn’t be such a big deal.

The article went a little south near the end, but the general idea remains the same. DC Comics is making a ton of great moves that looks to disrupt the industry. They are creating books in a variety of sizes for a diverse audience and extending their reach beyond your LCS. In a year or so, you can expect to see more DC Comics lining the shelves of your local library or Walmart or even GameStop. And that’s a good thing for everyone involved.