The DC Animated Chronicles: Superman/Shazam: The Return of Black Adam

Captain Marvel (that’s his name and shall always be his name, DAMNIT!) is one of DC’s more interesting characters. Not for his power-set or his duality as both an adult superhero with a child-secret identity. But because for a time, many eons ago, he was one of DC’s most popular and prolific superheroes. He was one of the first comic book properties to crossover into movies and TV shows, but somewhere along the way his popularity waned and he was mostly benched. In the mid-2000s, he made a minor resurgence with a featured episode of Justice League Unlimited, cameo in the DTV Justice League: New Frontier, and a somewhat meatier turn as antagonist to Superman in Superman/Batman: Public Enemies.

In 2010, Captain Marvel was given a spotlight showcase in DC’s Animated shorts collection. Superman/Shazam: The Return of Black Adam is closer to a stand-off episode then DC’s typical short, but it does highlight Shazam’s origins and much more. Let’s get down to it.

Superman/Shazam packs a lot of content into its short-run time. Though it starts off on a note, I don’t quite understand with Clark Kent (Superman’s alternate disguise) interviewing Billy Batson for a reason I never quite get, other than to put Superman in proximity for when the action begins.

And the action begins quickly with Black Adam making his debut and just causing mayhem. Billy is his target, but unbeknown to him why. He is chased into a train station and before he can meet a fatal end is transported to the Wizard Shazam, who explains to Billy that he has been chosen as their next protector, and warns him of Black Adam. The last protector chosen by the Wizard who was corrupted by his power. Before The Wizard can tell Billy more, his cave begins to crash in.

While all of this is happening, Superman and Black Adam are engaging in a pretty stellar battle. Unlike most super-powered foes though, Black Adam’s powers are derived from magic, which proves to be his advantage in this fight. Though while the two giants bat each other around, this short is able to instill a bit of humor and back and forth between them.

Sometime during their battle, Billy emerges from the Wizard’s cave, while he is infused with the power of Shazam, he was never told how to activate it. While being hunted by Black Adam, he is able to transform by shouting the magic word, and the battle turns into a 2-on-1 encounter as Black Adam does battle with Superman and Captain Marvel. 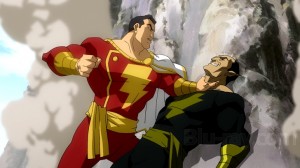 Though Black Adam is outnumbered, being evil has its perks, and he does some dastardly things to separate Superman and Captain Marvel, and proves to be some exhilarating action. The heroes, as they are known to do, wins, but instead of risk imprisonment again, Black Adam transforms back to his human form and ages a thousand years and dies.

The movie ends, in that weird Superman 2 way, with the hero getting revenge with his powers for an incident that took place early in the short.

The short does a really good job of establishing a lot of Captain Marvel’s universe in the short amount of time. Probably, it’s because I’m not overly familiar with his on-going adventures, but you get Billy/Captain Marvel, Black Adam, The Wizard Shazam and even Tawny represented here. Learn about the source of his powers, and Billy’s good-natured heart. Animation is top-notch, voice work remarkable.

While this is a Shazam-short, I found the real stars to be Superman and Black Adam, and love their first exchange. Not often you get to see Superman deliver a zinger.

The power of the wizard has entered the universe!

Next Up on the DC Animated Chronicles: Phase II – Villains!