A television series offers many benefits over a movie. One such thing is being able to slowly develop stories and characters instead of doing everything in roughly two hours. Superman: TAS took this luxury to introduce one of DC Comics’ biggest baddie. While Darkseid would appear early on throughout the series, Apokolips… Now 1/2 would serve as his proper introduction to the universe and more importantly, Superman.

Darkseid brings his battle against Superman to Earth. While all looks hopeless, Orion, an escapee from Apokolips’ firepits, teams up with Superman to defeat Darkseid’s advances.

To me, there are no bigger bads in the DC Universe than Darkseid and his introduction to the Timmverse is nothing short of fantastic. There is a lot to introduce and play-off in these two episodes, but they do a very admirable job with it. 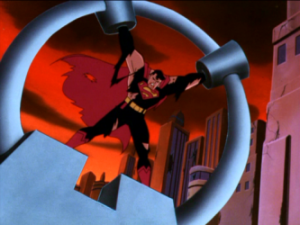 Before we get into Darkseid though, these two episodes also center around one of Superman’s supporting characters, “Terrible” Dan Turpin. One of the roughest, toughest cops in the Metropolis Police Department. Dan appears throughout the series, but this is his crown-achievement, and sadly his bitter end. One of the earliest major deaths in the Timmverse, it is also one that hits pretty hard. I think what makes it more vicious than anything is that Darkseid does it simply out of spite. As a final, pretty much F-U to Superman. Twas, you get a twofer out of it: a powerful death and a villain with no redeeming qualities.

Getting back to Darkseid and the rest of this episode’s focus. It does a great job of showing Darkseid as a manipulative and cold-bastard. First by using and then killing his agent on Earth, Mannheim, and then we learn all about his backstory and giving up his children in exchange for a “peace” deal. We learn about how much his son, Orion, loathes him and how much he has warped his adopted son’s mind. Ultimately, we learn more than anything Darkseid only cares for Darkseid and power. It is all very cut and dry. There’s no attempting to make him sympathetic or grounded. Darkseid is evil in the DC Universe, and all the better for it.

I spent half the thoughts section on this so of course, the death of Dan Turpin is the moment that stands out the most from this two-parter!

Next up on the DC Animated Chronicles Darkseid teams up with Brainiac to cause havoc for the Justice League!