The name “Suicide Squad” isn’t the prettiest name in the world, but it has to be if you’re a gang of supervillains attempting to break INto a place that stations the World’s Greatest Superheroes. Task Force X is the animated (and really outside of comics) debut of the Suicide Squad and proves to be a bit of a mixed bag.

Five incarcerated super villains are offered suspended sentences if they can survive an impossible mission: steal a deadly weapon from the Justice League’s satellite headquarters.

Task Force X is the first really valley in the battle of the Justice League vs Cadmus. While their paths intersect at many junctions, this was the first time an out and out assault on the other was caused. It is an interesting framing device too since Cadmus recruits a team of supervillains for this mission. While I enjoyed the team, I think it would have made a stronger showing if we had seen many of them before this episode. Aside from The Clock King, I don’t believe any of the members had made an appearance before this episode, and The Clock King wasn’t even on the actual team in the field.

The rest of the episode is pretty solid though. It gives a rare glimpse into the working of the Watchtower, and really gives lower-tier heroes a chance to shine. For the most part, as they have to balance the fact that the heroes of the story are villains, but the heroes still need to remain heroic in order for us to take em seriously throughout the remainder of the show’s run.

The episode also has a nice sense of urgency and humor to it. A fun mixture that gives the episode a feel of it’s own.

I noted before that the episode has a sense of urgency and humor to it, but it does take the moment to slow down and provide a classic elevator moment. 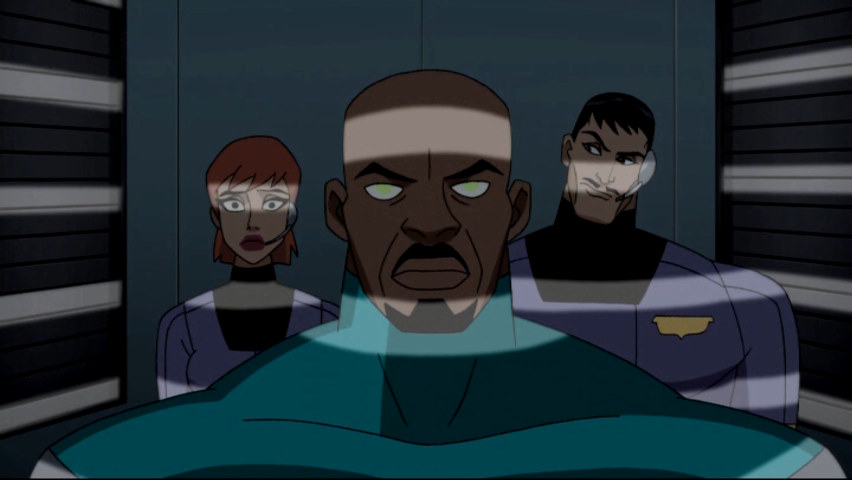 Next time, the villains get smart and form their own League in “I Am Legion”