One of the concerns with any major superhero team is finding a threat large enough to warrant their combined effort. The first season of Justice League kind of suffered in that regard, but wasted no time in attempting to fix that with season 2. The first pair of episodes featured two of Superman’s biggest and most deadly foes in Darkseid and Brainiac!

When Apokolips comes under attack by Brainiac, Darkseid has no choice but to seek the help of Superman and the Justice League. Caught betweenKrypton‘s darkest legacy and the despot who nearly destroyed his own legacy on Earth, Superman is conflicted and suspects that there is more going on than meets the eye.

This is the episode that really started to bring the “Timmverse” together. Yeah, Batman and Superman had remained constants throughout the entire run, and we even saw elements carry over like the dynamic between Lex Luthor and The Joker. But this was the first episode that really felt like it took advantage of the emotional toll on the heroes, and started to build on that to a terrific degree.

Superman is a hero above all else, and will never stop being a hero. But that doesn’t mean a part of him doesn’t rage with anger and hatred at someone like Darkseid, who we noted previously, is just one cold-bastard. 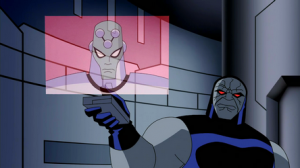 On that same note, Darkseid doesn’t care who he screws over in the process to get his way. Brainiac allying himself with Darkseid makes sense since he only functions in logic and reason. Darkseid doesn’t necessarily have those loyalties so it isn’t a complete shock when he betrays their alliance for his own gain.

Episode is pretty damn good on it’s own, but it sets the stage for so much that would play out over the course of this season and the next 3.

Next up, The Justice League deals with a very wild card!