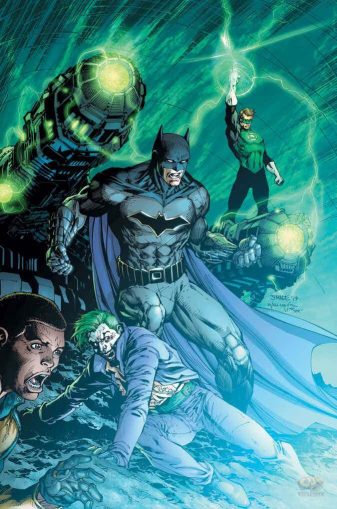 Scott Snyder and James Tynion’s seriously ambitious scripting and the power artist trio of Jim Lee, Andy Kubert, John Romita Jr and their respective inkers Scott Williams, Klaus Janson, and Danny Miki continues to connect threads in the DC Universe and even gaze into the abyss a little bit in Dark Days: The Casting #1. Snyder, Tynion, and Kubert continue to use the archaeological exploits of Carter Hall aka Hawkman to frame the story in the big picture while Lee comes in and draws a seriously creepy Joker, and the story is concluded by Romita like some kind of artistic relay race. The different plots are technically connected by the various magic metals in the DC Universe (Especially good ol’ Nth), but the characters of Batman and Duke Thomas that Snyder has spent years developing in Batman and All-Star Batman end up being foundational to the story. This is a good move because people are way easier to connect with than the Hawkman mythos or alien metal.

However, there is one caveat about this prelude to DC Comics’ summer “Metal event”: it is deeply rooted in Snyder Batman story arcs, including “Death of the Family” and “Endgame” as well as Detective Comics #27 where he established a futuristic machine to ensure that Gotham will always have a Batman. Snyder and Tynion pick up these plot threads and expand them on an exponential, cosmic level that we’re barely beginning to understand. The presence of Hal Jordan and Wonder Woman easily welds what could just be a Batman/Hawkman flashback story to the cosmic and divine sides of the DC Universe. Something in Nth metal is affecting the Guardians of the Universe as well as the not so omnipresent Greek gods. Romita and Miki’s depiction of Hephaestus’ forge as a drab, desolate place shows that even though Batman might have access to magic daggers and super cool flame lightsaber things that once belonged to the god Apollo, no higher power will intervene in the mystery for now. (Also, it’s wayy too early in the game for a deus ex machina.)

With the “help” of some Joker double talk, Snyder and Tynion establish the young hero, Duke Thomas, as the wild card and possibly center of Dark Days. Romita and colorists Alex Sinclair and Jeremiah Skipper deliver on some seriously epic moments in the final pages of The Casting that will make fans of his early days in Batman and We Are Robin triumphantly punch the sky. There is also tension in some of the revelations about Duke that cast doubt on Batman’s purposes for taking him in as well as his reasons for being okay with him being his own hero and not a Robin. Batman doing morally questionable things to stop an even greater evil definitely is one of Dark Days’ major themes and turning the Joker into a semi-ally figure doesn’t help clear things up.

One of the best things that Dark Days: The Casting #1 pulls off is making Hawkman palatable and yes, cool. To this point, Hawkman has been one of my least favorite DC heroes thanks his portrayals as a misogynistic dick in the Justice League cartoon and Legends of Tomorrow. However, Scott Snyder, James Tynion, Andy Kubert, and Klaus Janson go back to his old school origin as Carter Hall the archaeologist and turn him into basically history’s greatest detective. His narration deftly ties together all the corners of the DC Universe from Etrigan to Ra’s al Ghul and the Challengers of the Unknown and even more. And it’s not static as Carter’s tone changes from idealism to utter fear as Kubert switches his art style from stout, classic pulp adventures (In the mode of Joe Kubert.) to cosmic horror by the end of the book. Along the way, Janson helps with foreshadowing through some darkly inked shadows that pop up even when Carter is monologuing about utopias. The Hawkman storyline in The Casting is basically Indiana Jones meets At the Mountains of Madness and seriously made me hope for an Andy Kubert penciled spinoff comic once this whole “Metal” thing wraps off.

Dark Days: The Casting #1 is a fascinating adventure into the magical and mythological sides of the DC Universe and a great set-up for the archetypical battle that is “Metal”. It’s also a showcase for three of their heavy hitter artists Jim Lee, Andy Kubert, and John Romita Jr., and writers Scott Snyder and James Tynion don’t skimp on characterization either using Batman, Hawkman, and to a lesser extent, Duke Thomas and Joker to help iron out some of the lore or propel readers deeper into this rabbit hole that happens to be a superhero, kinda horror comic.

Verdict: 6 (out of 7) – Dark Days: The Casting #1 is another engrossing chapter in this deep dive DC Universe mystery. Also, Andy Kubert draws the hell out of Hawkman, and Jim Lee does the same with the Joker.