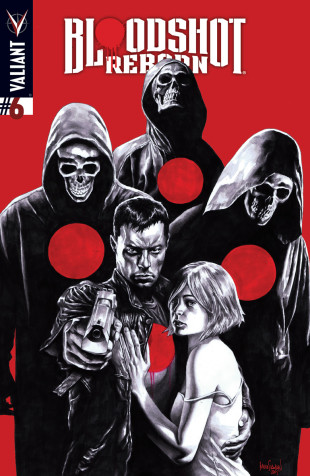 “The Paybacks” debut and they’re here to repossess your stuff, the hunt for psychos continues in “Bloodshot Reborn”, and we meet a one-armed swordsman in “Usagi Yojimbo” – all in this week’s reviews from Dark Horse and Valiant Comics. 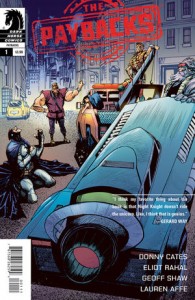 It’s a question that gets waived away in comic books – “where do they get those wonderful toys?” Suppose there was an entity that provided loans for crime-fighting equipment. Given that assumption, it is only natural for there to be a group of repo men to take property when Mr. or Mrs. Superhero falls behind on their payments. Enter our eponymous team. This inaugural issue dives right into that scenario when The Paybacks collect from a brooding, totally-not-Batman hero named Night Knight. Meanwhile, the other half of the team (made up of totally-not-Marvel characters) meet heavy resistance trying to repo from another hero.

Shaw’s versatile art keeps up with a varied cast of character and locales while the writers keep the tone light with unicorns and a Russian behemoth who only speaks English in action movie lines. The premise already had my attention and the ending to this issue will keep me coming back for more. 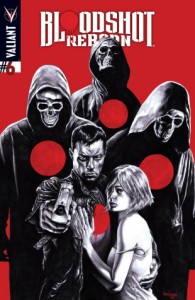 “Ninjak” artist Butch Guice lends his realistic style to this issue following Raul Allen and Patricia Martin’s surreal take with #5. Having seemingly rejected the taunting hallucinations that have dogged him since issue 1, the nanite-infused-killer-formerly-known-as-Bloodshot continues his quest to stop newly nanite-infused people from going on killing sprees (as they have the tendency to do). But he isn’t alone – a young woman named Magic is determined to stay by his side.

While this title has eschewed super-heroics this entry was particularly grounded (high-tech nanites excluded, of course). The majority of this issue follows 2 relationships: the developing trust between Ray and Magic and the evolving partnership of the detectives on Ray’s trail. This has some of the most adult content I’ve seen in a Valiant title so far and it’s been a treat to see the universe expand in this way. 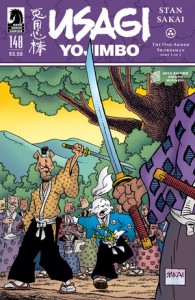 Sakai’s long-running series about a long-eared ronin is no stranger to well-deserved praise and this self-contained issue joins the ranks of its predecessors. When Usagi crosses paths with a one-armed samurai we are given a story about disgrace and redemption. While only black and white, Sakai’s art is still expressive, from uniquely detailed kimonos to lightly-inked flashback sequences. Combined with samurai speech and competent action framing this was a pleasure to read.