“Vampirella/Army of Darkness”, “Harrow County”, and “Ninjak” – all in this week’s reviews from Dark Horse, Dynamite, and Valiant Comics. 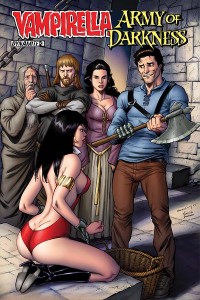 Our time-displaced headliners can’t seem to catch a break. More than just misunderstanding modern idioms (“Shitload?”), Ash’s medieval cohorts subject Vampi to a “trial by ordeal” despite the looming deadite threat outside the castle walls. Unfortunately this kangaroo court takes up most of the issue but with Ash representing the accused there are some decent jokes had at his expense. Light on the action, the next issue promises to really pop off. 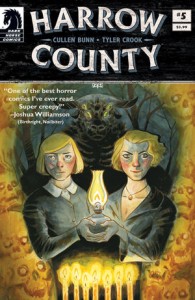 What do you do when you discover you’re the reincarnation of an evil witch and your whole town is trying to murder you? Well if you’re Emmy you might just build a bridge and get over it, after making the appropriate threats of course. Emmy does her best to return to normal and put her powers to good use but there are still those in town who know magic has a terrible price. Add to that the haints who still populate the woods and dark corners of Harrow and this teen witch has got her hands full.

The first arc’s conclusion surprised me. I expected Emmy to be on the run from the townsfolk for quite some time but Bunn has bent the story in a far less cliche direction. Emmy is determined to not become the new Hester Beck but how much longer can she control her powers or the supernatural beings around her community? The creepy horror tone of the earlier issues has added a dose of YA flavor but it doesn’t hamper the story one bit. Emmy’s mature characterization and the water color art make this one to follow. 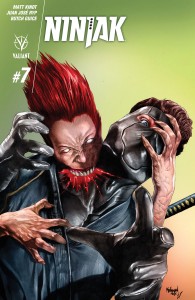 Didn’t issue #6 just come out 2 weeks ago? Ninjak returns from his short reprieve to take out another member of the Shadow Seven and yet again Kindt has teamed up with a different artist to take us on a new visual ride. Outfitted with a host of intense body modifications, Sanguine is the most disturbing of the Shadow Seven foes yet (outside of Roku that is).

Last issue earned a perfect score from me but it would seem the bar was set too high as this issue, while not bad, is a more run-of-the-mill outing. It has all of Kindt’s touches and his characterization of Ninjak rings so true. However, the story is straight-forward and the art doesn’t stack up the the dynamic pages of #6.