“The Paybacks” find more dead heroes, “The Steam Man” takes a nightmarish time traveling journey, “Bloodshot Reborn” continues its dark tragedy, and “Wrath of the Eternal Warrior” makes its spectacular debut – all in this week’s reviews from Dark Horse and Valiant Comics. 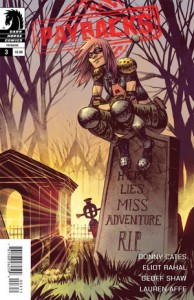 “Payback’s a bitch” – that phrase takes on a darker tone when it’s found scrawled above the bodies of murdered superheroes. As our titular repossession team ponders who could be behind the killings we learn Miss Adventure’s backstory, which involves financial ruin brought about by the collapse of the auto industry in Detroit.

Issue #3 fleshes out this world of broke crime fighters and keeps the jokes coming, although there are some lulls in the action and the jokes are hit or miss. Shaw’s sketched style gives energy to the panels but I found myself pausing to make spacial sense of some scenes. 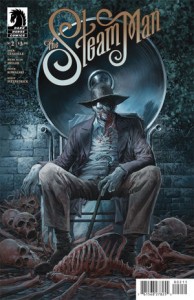 With a 19th century giant robot on his tail, The Dark Rider tells us just how he got so dark. Fitting with the mold established in its debut, #2 mixes classic Victorian sci-fi with Lovecraftian horror for a creepy (yet undeniably appealing) origin. The Dark Rider’s narrative comprises the whole issue and while I would’ve preferred a “here’s why the bad guy is bad” revelation after some more giant robot action, it seems we’re set up for a showdown next issue. Kowalski’s art continues to keep this mad mash-up afloat and is wonderfully complemented by Kelly Fitzpatrick’s coloring. If H.G. Wells had lost his mind he would’ve put something to paper like this. 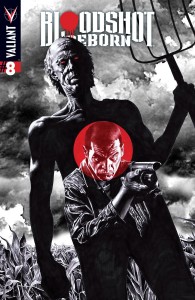 Desperately resisting the call to return to his old ways, the killing machine formerly known as Bloodshot has had to put his lethal skills to use thwarting would-be nanite-infected successors from murdering innocent people. As Ray inches closer to his pale-skinned destiny, Agents Hoyt and Festival learn more about the shadowy project that created Bloodshot and who might be the true culprit behind the latest rash of murders. This isn’t an all-ages book.

Guice gives his pages so much detail and his art explodes all over this issue in collages and double page spreads. The graphic content and heavy themes are countered by the pastoral farm scene and tender moments between Ray and Magic. Ray’s arc of seemingly endless suffering is beautifully depicted in line and letter. I definitely gasped a few times while reading this one. I wonder how Lemire will wrap this up before the new arc.

Wrath of the Eternal Warrior #1 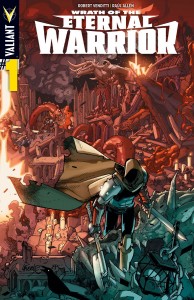 I was initially going to give this debut a 6 but upon re-reading the story and seeing how well Venditti has written this inaugural issue, I have to give it a perfect score. Following the events of “Book of Death”, The Eternal Warrior is dead. Finding himself in a familiar realm “beyond the veil of life”, we see Gilad in two locations which may not be so separate. One is a peaceful, rustic vision complete with a loving wife, joyful children, and a faithful dog. The other is a demon-filled hellscape.

When Venditti was announced as the writer for this ongoing I was thrilled but when I found out Raul Allen would be handling the art I just about did a backflip. I know some were thrown off by Allen’s fill in on Ninjak #6 but I thought it was one of the most visually dynamic things I’ve seen this year. Having one of your favorite writers and an artist whose style you love on the same title sets a lot of expectations, but Venditti and Allen blew past them before I even finished the book. Venditti’s strengths are in play, with tug-at-your-heartstrings moments and sincere interactions between real, feeling human beings amidst fantastic settings/circumstances. That alone secures high praise but Allen’s stark style, bold lines, and use of montage give Gilad a whole new flavor.