The “Zodiac Starforce” face invading monsters, “Unity” teams up for the last time, the Vine target Harada in “Imperium”, and we get a double shot of Cullen Bunn creepy-ness in “Harrow County” and “Hellbreak” – all in this week’s reviews from Dark Horse, Oni Press, and Valiant Comics. 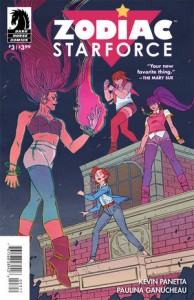 With a portal spewing monsters into the city, the titular team must confront the threat without their longtime leader. I was onboard with the first issue and the diversity at play has been a fresh spin on the “magical girl” trope but over-inflated word balloons add needless speed-bumps to this adventure. I understand the attempt to make richer dialogue (and perhaps echo chatty teens) but the end result is a clutter of white and black over Ganucheau’s day-glo art. Showing > telling 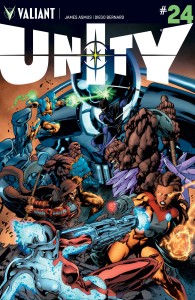 When the Armor Hunters turn GIN-GR into a missile of death aimed for a GATE military base, it’s up to Valiant’s premiere fighting force to avert catastrophe. Seeing James Asmus’ name on the previous issue was a welcome surprise – finding Karl Moline’s art inside this one (instead of Diego Bernard’s) was not so welcome. With all the madness in this installment I would’ve preferred Bernard’s cleaner look.

The inner cover informs us that the events take place before “Book of Death”, but with that grimly-titled miniseries already over (and the fate of Eternal Warrior known) it robs this issue of its weight. As the next (and final) issue of “Unity” will be a humorous one this served as a competent (but not mind-blowing) finale, retreading the “we don’t trust each other but we work together well” themes from the last arc. 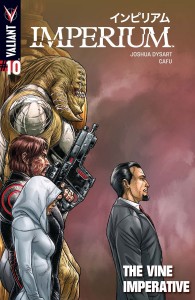 Dysart continues to weave his dense piece of poli-sci-fi with homicidal aliens, megalomaniacal psychics, and gentle-hearted robots. This is a comic that truly benefits from its recap page. This time around we learn the roots (no pun intended) of the beef between the Vine and psiot extraordinaire Toyo Harada. The issue’s use of two artists to separate the time period adds a flourish to this tale of brutal conflict. Multiple story-lines are progressed, tension is ratcheted up – when this powder keg blows, it’s going to be nasty. 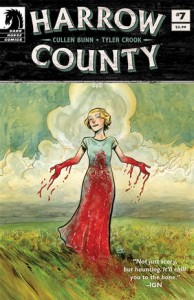 When Emmy’s twin sister Kammi showed up it wasn’t so subtle as to which sibling leaned to the dark side. In this installment, Kammi makes good on that first impression by “making friends” (or amassing an army – however you want to look at it) with the supernatural entities that hide deep in the woods. Meanwhile, Emmy (fruitlessly) tries to return to her old life (again).

Where some writers milk the drama out of their stories for high page counts, Bunn propels his story from twist to turn. How much the story has evolved from #1 and continuously surprised me is a testament to Bunn’s skill. Kammi may be Emmy’s dark mirror but Emmy isn’t naive – she knows enough about their shared lineage to be cautious. It’s these types of developments that keep the title intriguing, and that’s even before we touch on the art. From the creative opening splash pages to the marvelous water-colored eerieness, “Harrow County” is one of the rare titles I look forward to every month. If that hasn’t sold you yet, the bonus one-pager at the end of this issue is the most disturbing short story they’ve had yet. 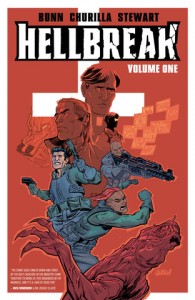 “Hey look – it’s Cullen Bunn’s other horror series,” is what you might say, but “Hellbreak” fits into that “Hellboy” chimera mix of action-horror-comedy. Volume 1 follows an extraction team who free the souls of the possessed by going into Hell and retrieving them. The job is just as dangerous as it sounds and we’re shown the all peril running around the underworld can generate. Of course, the story isn’t as one dimensional as following soul repo-men however. There’s a recently possessed man whose soul may be better off left in Hell, a lead with a tragic past, and an overarching layer of mystery surrounding the company conducting these raids. And last but not least, Churilla’s versatile art takes readers to Hell and back literally.