“Solar: Man of the Atom” just keeps getting weirder, “Bob’s Burgers” delivers with all the fixin’s, “Ivar, Timewalker” comes face to face with Hitler, and “Divinity” pits a God against Valiant’s heroes in this weeks top notch titles. 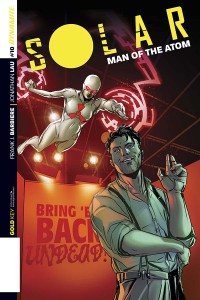 After Doctor Spektor’s reveal at the end of the last issue, he wastes no time using his magic skills to help Erica battle her robot enemies – exploding the manikins into a cloud of butterflies was a nice touch. And – at last – ten issues in we’re treated to a bizarre Seleski family reunion with Colin confirming dad and sis weren’t the only ones affected by the accident that turned Erica into a (reluctant) superhero. This is a meaty issue, with all sorts of info dumped and even an old villain announcing his return. It’s a lot to swallow but at least the new arc looks to keep the excitement going.

The art is explosive, with nuclear and supernatural powers alike firing off in all sorts of electric shades. Yet amidst the fantastic, Lau manages to highlight the human features – Spektor’s non-chalant attitude, Erica’s frustration, and Phil’s increasingly aged appearance. 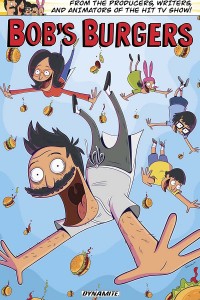 I was a fan of this mini-run so it’s a treat to see all 5 issues together in one spot and at a decent price point. Extra art is included and one variant cover of the family in NYC made me LOL when I saw Tina checking out the Naked Cowboy. That girl cannot get enough butts. Issue #3 is still my favorite (peep the old review here http://nerdsontherocks.com/comic-review-bobs-burgers-3/) but there are many more hits than misses in this collection, making it a true must-have for any die-hard fan of the Belcher clan. If they try another run I’ll definitely be back for seconds. 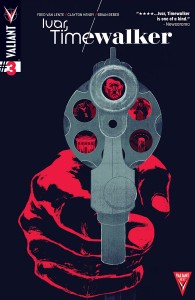 “The worst part about time travel is that today will never technically end.” Trapped in a Nazi base, Neela and Ivar must find a way to escape fascist clutches or be stuck in the WWII era forever. As if Nazis weren’t bad enough, Neela has to confront a Lurker – a being from a far-flung future who is essentially a 4chan troll complete with “built in cosmic string fap drive”. Jumping across the 4th dimension allows for lots of wacky set ups and this book is a lot of fun, but there is an undercurrent of moral complexity throughout. Gilad the Eternal Warrior’s cameo serves to deliver the point that “Monsters do no exist. There is only us.” The duality of man is some heavy food for thought, but the tone is balanced surprisingly well with the mad-cap time hopping adventure. I feel like anything can happen in the title and Van Lente’s expert touch at trying to inject some philosophy into the story makes me that much more excited to read it.

Props to Henry and Bit’s solid art for depicting the madness and the more contemplative moments perfectly. Of note, they’re able to capture Nella’s varying shades of confusion (and she’s confused a lot), from befuddled to exasperated, in nuanced yet unique detail. 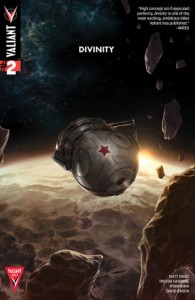 What happens when a god comes to earth? After last issue I was wondering what effect this powerful being would have on a planet already home to such characters as X-O Manowar and Ninjak. Well it looks like we’re about to find out, as Unity is sent to investigate just what the hell is going on. From the narration that reads like it’s recounting a secret legend to the textured art and lush coloring (details like the rainbow of buttons in the background of a spaceship won me over), this is shaping up to be a beautiful, if still enigmatic, title. With 2 issues to go I wonder what the fallout will be.