Prince Valiant returns, we take a trip into the Twilight Zone, and Django and Zorro get closer to dishing out justice to some evil do-ers.

Let’s close February out with 3 new books from Dynamite. 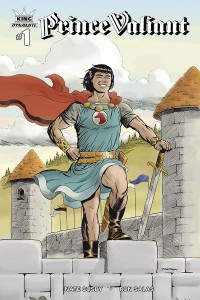 I didn’t even like Prince Valiant in the funny pages so I don’t know why I thought I would enjoy this issue. Last week’s Mandrake book got me jazzed on the King line so I thought I’d give the inspiration for Pete Rose’s haircut another chance. This issue introduces us to a young Valiant through a story being told to a mysterious character.. who even comments on how boring and pointless the tale is. Not a good sign when even the other characters are bored. Furthermore, the art is nothing to write home about, with some rushed-looking panels in the middle. At least there’s Flash Gordon to look forward to in 2 weeks! 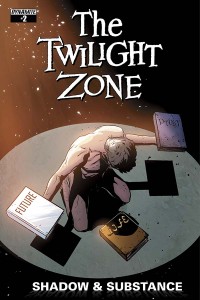 The Twilight Zone: Shadow and Substance #2

What would you say to yourself if you could go back in time? If we are the sum of our experiences (good and bad) would you help your past self or be indifferent? William Gaunt is struggling to answer those questions after he finds himself inexplicably transported to the past.  There is some real emotion in this finale and it balances the old school Twilight Zone feel while still having a modern edge. For instance, the opening narration welcomes us back like it’s Rod Serling after a commercial break, while the verbal child abuse suffered by the protagonist is something that would never air during the series’ original run. My one complaint was I found the art to get a bit wonky and off model every once in a while but I can’t deny I nearly choked up when adult Will faces off against his mother. I feel The Twilight Zone was almost always about hope, even in its downbeat endings. And while I won’t tell you how this one ends, I found it to be a cathartic read. 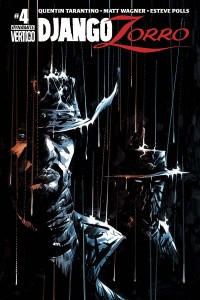 Following last issue’s lead, this title is starting to pick up more of that QT flash – dialogue, dialects, and unique characters. We are getting ever-closer to the inevitable team up between these two as Django suspects the foppish Don Diego is a masked avenger. Polls pencils are still a fitting match for this Western tale, giving us an action-packed finale with a scuffle between Indians, overseers, el Zorro, and the fastest gun in the South. While I wish our two leads would join forces already, seeing this entry from Django’s eyes gave us his perspective on the plight of the Native Americans and his relationship with Dr. King Schultz. There’s some interesting commentary here, comparing the South with the Southwest, and also, things go boom.