Hello, readers! Sorry I played hooky last week. I was in Arizona psychically healing from watching/enduring “50 Shades of Grey” (the less said about that the better). But enough with the excuses – we’ve got 4 interesting titles from Dynamite so let’s get the reviews underway. 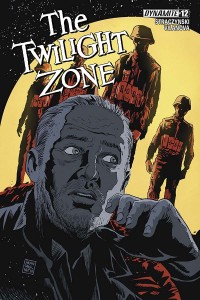 So ends the arc for one of the first comics I covered for this site. However, having guessed the twist early on hasn’t made this the most thrilling read for me. Notably, this book serves as a wrap up not only for “The Way Back” story of Roy Chambers and his murder investigation, but it also puts a bow on the first dozen issues in this new Twilight Zone series. It’s a nice reward for those who have been following the relaunch but if you’re a newcomer you’ll be out of the loop with all the callbacks and references. As for the art, Vilanova really put some effort into this finale and there’s some wonderfully detailed panels throughout. There’s a daylight scene in Central Park that I took my time going through just because it looked so damn nice. I would still say it’s too little too late but I really appreciate this conclusion being the payoff for twelve issues of build up. 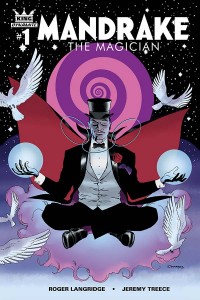 What a pleasant surprise. The King line has been a bit of hit and miss for me but this book did a great job of making sense of post-invasion Earth (“no technology?.. oh I get it – it’ll be like a retro Earth, closer to when these characters were introduced”) and setting the stage for our titular illusionist. Treece’s drawings go more cartoony than pulp which isn’t a bad thing in a story about a magician – it made me feel like I was reading a really fun childrens book. But don’t let the art style fool you – it gets nuts when Mandrake matches skills with a fellow magic-maker at a benefit show. The fact that Treece served as colorist too makes the effort that much more impressive.. well that, and the Prince cameo he managed to sneak in (I see you, His Royal Badness). But more than the flash, this book touches on Mandrake’s personality and his desire to bring a sense of wonder to a defeated world through his magic. Hopefully that goal will give him the strength to defeat old enemies who have returned. 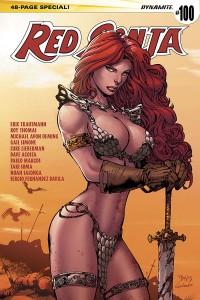 The red-haired sword-swinging she-devil (that’s a lot of hyphens!) has hit her 100th issue and gets her own 48-page special with 5 tales from authors pulled from her long history (thats a lot of numbers!). While the quality varies from tale to tale it’s a treat seeing artists’ different interpretations of the Hyborian warrior. I think the book leads with it’s strongest story visually (Dave Acosta’s take on Sonja impaling a giant arachnid is probably one of my favorite spreads this year so far) but Gail Simone’s entry with our heroine meeting her inspiration is appropriately touching. It’s always special to see Sonja doing anything other than kicking ass, so those contemplative/self-reflective moments are memorable. A must for fans and worth a look for those wanting to see what that babe in the chainmail bikini is all about. 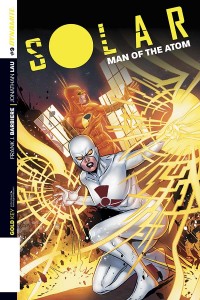 Erica is back home, trying to return to some state of normalcy after bouncing around the galaxy, having alien adventures with her incorpreal father (it’s complicated). But things just can’t stay peaceful for a girl with nuclear powers – cats are apparently drawn to her and, oh yeah, a reactor is melting down nearby. I have missed this book and I’m happy to see things aren’t slowing down just because the cast is back on Earth. There is actually some pretty serious violence here – far more gruesome than anything we’ve seen in past issues. Whatever new threat is gunning for our lead, it doesn’t play nice. The humor is here, the action is here, but I’m knocking it a bit because the art doesn’t pop like it usually does. More than a few backgrounds were underdetailed but it’s still a fun start for a new arc.