“Harrow County” gets an unexpected visitor, “James Bond” is alone in Berlin, and “Ninjak” causes a heap of trouble in another dimension – all in this week’s reviews from Dark Horse, Dynamite, and Valiant Comics. 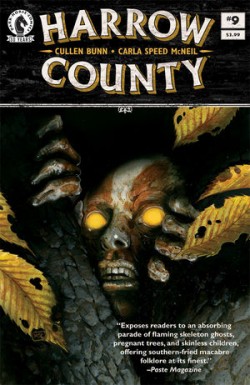 Writer: Cullen Bunn & Tyler Crook Artist: Carla Speed McNeil & Jessica Mahon Colorist: Jenn Manley Lee After taking January off, “Harrow County” returns with a solo story starring Emmy’s Skinless Boy before embarking on a 2-parter next issue. An evil man (“I’m the bogeyman’s bogeyman”) rolls into town and drops clues about the Skinless Boy’s pre-flayed life. The majority of this nightmarish narrative takes place while our heroine slumbers but this midnight sojourn hits the creepy notes Bunn has played so well since issue #1. But don’t be surprised if a story about a child who loses who humanity gets you feeling sympathetic. This is not a book for new readers unfamiliar with the strange, eponymous township, but a special entry that fleshes out (no pun intended) a mysterious character and adds to the horror and drama surrounding Harrow. Although series artist Tyler Crook sits this one out, his touches can be found on the cover and in the script to the bonus story. I was worried about the fill-in art due to the series’ distinct style but McNeil’s solid work was wonderfully complemented by Mahon’s bold coloring. The trademark watercolor swirls are traded for a deep black which dominates the issue, which works in this story about monsters. 6 out of 7 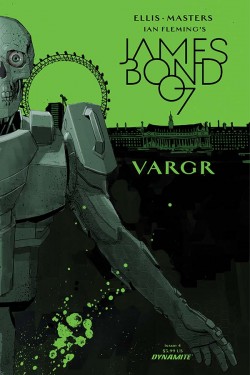 Writer: Warren Ellis Artist: Jason Masters After brutally dispatching some thugs, 007 finds himself without a base to return to when the Berlin Station is massacred. Good news: a friendly chap agrees to take him to a safe house. Bad news: he’s the same chap that massacred the Berlin Station. Of course Bond doesn’t know that at first, but when his suspicions get the better of him, it’s Her Majesty’s best against a man who can’t feel pain. While I wasn’t so sure of the plot-line in the opening issues, the pitch black humor and tradecraft verisimilitude prove Ellis to be a great fit for the title. Future-tech plot points aside (the disease delivering “narcotic trojan horse” found in spiked cocaine for example), by the last page we find 007 in a classic death trap. However, Ellis’ run is like “Kingsman” in the way it takes Bond tropes, modernizes them, and makes them R-rated. Even a trademark villain monologue is shown to have its purpose: stalling Bond until the lab decontamination procedure starts up. Artwise, Masters’ characters can look wooden at times, but his fight scenes still manage to bring a high level of savagery to the page. 5 out of 7 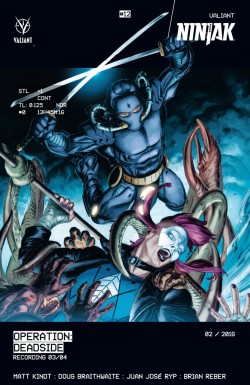 Writer: Matt Kindt Artist: Doug Braithwaite & Juan Jose Ryp “Operation Deadside” continues as Punk Mambo and MI-6’s resident bad-ass search another plane of existence for a lost fugitive. Their hunt brings them face to face with the Magpie aka Shadowman who has his own reasons for abducting prisoners. This issue is half supernatural journey into a fantasy world and half 80s buddy cop film, with one-liners (“I hate magic”) and tons of property damage. I have enjoyed how the last arc feeds directly into this one, with the members of the Shadow Seven being a key to Shadowman’s scheme to rid himself of Master Darque’s bonds. However, I feel like this issue took up a lot of page space just to get us to the prime spot of setting up a superhero showdown next issue. The fight between Mambo and Ember is a treat but on the whole I didn’t feel this issue was as strong as the last. Luckily, Braithwaite and Ryp’s art kills it (as usual) so no complaints on that front. 5 out of 7