“Stringers” and “Zodiac Starforce” debut, “Fight Club” disappoints, “Dead Drop” concludes, and Ninjak simultaneously dies in “Book of Death” while delivering a knock out issue in his ongoing series – all in this week’s reviews from Dark Horse, Oni Press, and Valiant Comics. 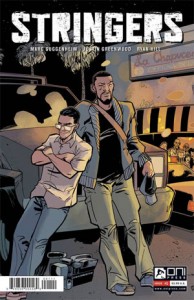 Upon seeing the cover I thought this was a “Stumptown” spin-off with “Arrow” co-showrunner Marc Guggenheim stepping into Greg Rucka’s shoes. However Greenwood and Hill create a new visual scheme for this decidedly different outing. Recalling last year’s “Nightcrawler” (the Jake Gyllenhaal flick which unfortunately wasn’t about teleporting mutants), “Stringers” is about a duo hunting for raw footage of car chases, car crashes, and assorted mayhem that trades the lone psychopath angle for a buddy action comedy. We get quick banter, trash talking with rival stringers, and expressive lines and color that really bring out the car chase that dominates the issue. My lone gripe (and it’s a big one) is the excessive dialogue. Word balloons clutter some pages when a “less is more” policy would’ve served this introduction better. 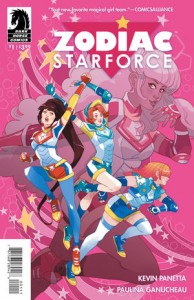 I don’t know much about Sailor Moon beyond the theme song so I didn’t know what to think about this homage to the magical girl trope, but Panetta crafts a cool story about a team of teenage super-heroines. It’s got “girl power”, takes its subject matter seriously, and forms distinct personalities for the Starforce members. There’s even a serious undertone at play with some of the girls reluctant to reunite and mentions of the real human cost of battling monsters. Furthermore, the Ganucheaus were able to utilize this electric color scheme that’s both bright and bubblegum without hurting my eyes. The last panel raises the stakes for the Zodiac girls and I’ll be looking forward to their next outing. 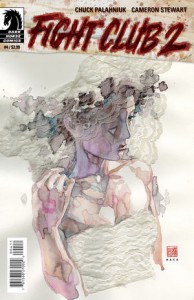 The search for Sebastian’s son intensifies, involving Project Mayhem, Marla’s progeria support group, and global conflict hotspots. Believe me – I want to like this series. “Fight Club” (both novel and film) were really important to me in my younger days but this title can sink to bad fan fiction and this issue hit an edgy new low. I did enjoy the running gag of free couches scattered throughout the city (with a lovely surprise hidden beneath the pillows) but the rest of the pitch black humor just didn’t work for me. It’s a shame because the art is very good, from the David Mack covers to everything inside. Not even the return of an old character could save this chapter. 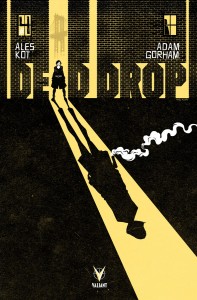 This mini-series has been an exciting trip through NYC and the Valiant roster, with each entry following a new lead and having a new flavor. After issue #3’s shocking conclusion for Beta Max, we wrap up our title in a different manner from the breakneck chase scenes the last chapters have provided. Sticking mostly to a single location, Detective Cejudo closes this case once and for all (if a little too cleanly for my taste). However, I did enjoy the overall series and hope for more light-hearted minis in the future, if only to counter the heavy ones like “The Valiant” and “Book of Death”. Shout out to Spicer for his solid color work in this entry too!

Book of Death: The Fall of Ninjak #1 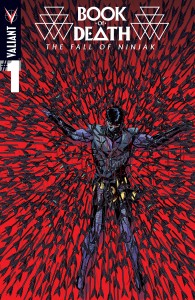 “I can feel and control every cell in my body,” says the former ninja spy, who has become something of a wise grandmaster in his old age. Surprisingly, this last story for Ninjak doesn’t lean so much on his ongoing series but on “Unity” and even “Rai” (all 3 are Kindt titles I should add). There’s a lot of interaction with his Unity teammates. We get Ninjak and Eternal Warrior bro-ing down which is kind of funny considering they just duked it out in “Book of Death” (but I digress). Ultimately this issue centers on a conversation between Ninjak and Livewire (or is it really Livewire?). This one is a slow burn with lots of easter eggs to reward loyal Valiant readers. 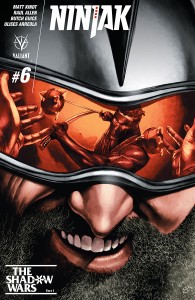 Off the grid and deep undercover for 2 months as an arms dealer, Ninjak (aka Colin King) is playing a dangerous game (and acting against MI6’s orders) to eliminate the Shadow Seven. Issue #6 ushers in a new art team with a more realistic style to better reflect the grounded espionage exploits. Gone are the superheroics, no better signified then when Ninjak has to ditch all his hi-tech gear when he takes on La Barbe – the latest deadly foe the Shadow Seven tosses at him. One of my gripes with this title has been Ninjak’s deus ex machina traits – in earlier issues he has just the right tools at his disposal. However “… a ninja’s true skill is demonstrated with nothing but his empty hands” and boy does King prove his skills can pay the bills.

This is the best issue yet, with creative art, color, and layout choices throughout. For example, there’s a sequence of a tiny Ninjak silhouettes bounding inside onomatopoeia that really impressed me. That kind of energy permeates the book and engages on every page. Furthermore, we get to see Ninjak be less stoic as he trash talks La Barbe. So we get killer art, an inspired fight scene, and an intense flashback sequence to shade in our enigmatic lead. With “Mind MGMT” ending it looks like Kindt’s idiosyncratic style is flowing into his other projects. I just hope he can deliver something this top notch again.