“Red Sonja/Conan” and “The Shadow” kick off with their first issues while “Bob’s Burgers” comes back for seconds – all in this week’s reviews from Dynamite Comics. 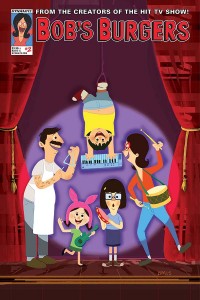 Having been a slave to the format of 3 short stories for the Belcher children and 2 single page entries for Bob and Linda since its inception, this entry not only cut the latter 2 portions but experimented with the art style like never before. Tina becomes Tarzan, Louise and company try their hand at time travel, and Gene’s rhyming story apes “The Lion, The Witch, and the Wardrobe,” each with a unique and fitting visual motif. 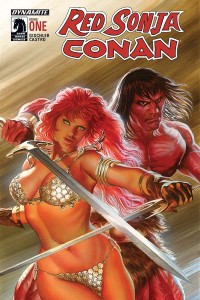 It’s a sword-swinging good time when the She-Devil and the Barbarian reunite to battle yet another wizard who thinks he can take over the world. It hasn’t been long since the Hyborian power couple linked up last but they waste no time separating haters from their respective limbs.

It would be easy for a story like this to devolve into cheese but Gischler keeps the tone light but not ironic. Castro’s art shines with the detail put into every castle brick and leather tunic. Shout out to Alex Guimaraes’ coloring for the special touches like adding a spattering of blood to Conan’s axe or giving the Cimmerian his rippling physique. 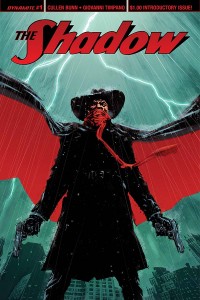 When a group of power hungry magicians seek out the secret to Houdini’s Last Illusion, the Dark Avenger must stop them before it’s too late. “Harrow County” scribe Clive Bunn delivers a take on the pulp hero that expertly balances double-barrel action with occult mystery. Unlike most number ones, this issue jumps straight into the fray with The Shadow in hot pursuit of his quarry but the magicians prove to be more elusive than the mere mafia goons he’s used to.

But Bunn isn’t the only one deserving of praise here – Timpano’s work takes advantage of the whole page, arranging panels in explicit service to the action. There are a number of spreads that only add to the scope of this adventure, from fights with circus performers to airplane chases. Timpano’s art not only works for this retro story, but gives off a fitting supernatural vibe. At only $1 this issue is a steal in every sense of the word.