“Rebels” sets up a mini-series about the American Revolution, “Big Man Plans” keeps punching us right in the dick, and “Re-Animator” resurrects Herbert West (for better or worse), all in this week’s reviews. 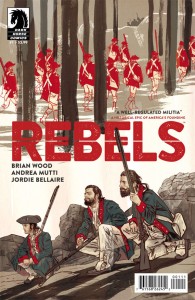 “DMZ” scribe Brian Wood takes a stab at showing an America not in civil war but in the early stages of its struggle for independence. Following the fictional Seth Abbott (and his soon-to-be-bride Mercy), this first issue introduces real colonial events and individuals before it’s over. “A Well-Regulated Militia” is the first of six issues in this title and gives a feel for the life of a common Colonialist during that tense year leading up to the signing of the Declaration of Independence. One of the side characters even admits “we are farmers and laborers, not lawyers or politicians… we seek no war with England.” That last part may be shocking to modern day readers, but not everyone was 100% on board with what some high-minded philosophers were plotting in Philadelphia. Issues with taxation? Yes. Full-on rebellion against England? Are you mad?

The art is perfect for this piece of historical fiction. Scenes from East Coast forests to rustic Colonial life are lush and heavily detailed, showing off Mutti and Bellaire’s synergy. I’m only knocking the book because this intro issue read a little dry, but I know it’s a necessary building block for the coming chapters. “Rebels” looks to depict a not so much gritty as a perhaps less romanticized version of the American Revolution and I look forward to issue 2. 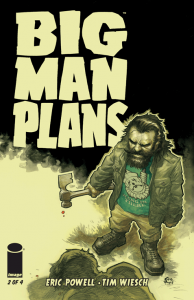 With that drywall hammer in hand and if-looks-could-kill-he’d-be-a-war-criminal stare you know some people are going to get hurt. This is a pain-filled issue (knees don’t bend that way!) and probably not one for the squeamish, but like I said with issue one – if you like your books mean and odd this is the title for you. So far we are two-for-two for touching flashbacks of Big Man’s Pappy (“…a real man is judged by his heart, not by his height…”) and furious nut punches (not in the same scene thankfully). I’m kind of hoping for a Bangkok Special every issue.

Powell’s art is always on point and the action flows effortlessly from panel to panel, especially when someone is getting the snot beat out of them. Midget Vietnam Vet revenge stories may not be heading to your multiplex anytime soon (hmm what is Peter Dinklage doing after Season 5 wraps?) but its a solid read that’ll put some hair on your chest. 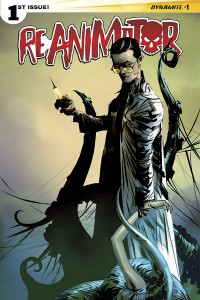 I’ve been waiting for this book for a long time, which may be why I’m so disappointed by it. I’m a HUGE fan of the film and I was eager to dive into some new gore-filled, undead adventures but something about this didn’t feel right. There was some gore and undead, but the voodoo and drug dealing plotlines feel out of place. Dr. Herbert West is great whenever he’s on the page but there are so many side characters I worry that the re-animator himself will get pushed out of his own title.