It’s nuclear armageddon for “Solar: Man of the Atom”, “Ninjak” goes deep undercover, changing the past proves difficult even for a time-traveler in “Ivar, Timewalker”, and “Divinity” continues to weave its epic space tale – all in this week’s reviews. 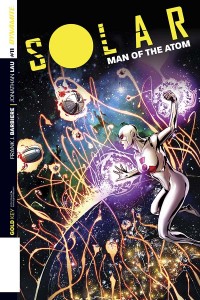 Last issue ended with a barrage of nuclear warheads being launched, leaving Erica and the rest of the Selenski clan (plus Dr. Spektor) to prevent the end of the world. Long-time Dr. Solar fans will be pleased to see old school enemy Eclipse finally leave the shadows and get his hands dirty, proving to be the toughest baddie yet.

This issue delivers a one-two punch of the series’ best strengths: warm, father-daughter moments and atomic-powered throw-downs. It’s a return to form for my favorite Dynamite title, even if I found myself alternating between enthusiasm and confusion while taking in the art. I guess I can’t be mad at the book for being sparse one week and then complain the next for being too cluttered. The final pages hit a frenetic pace which I hope will continue right into #12. 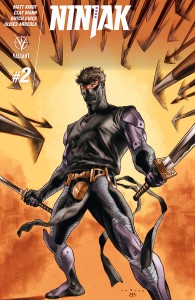 Having only seen Ninjak as a member of a team, this title shines a light on the enigmatic character. Kindt’s dense, mysterious tone is a perfect match for Mr. Colin King, giving us a flashback to his early spy days (told with a different art style), ninja action (goes without saying), and super high-tech gadgets that Q could only dream of. However, while I’ll admit I’m impressed by the style, I haven’t been completely sold on the substance just yet. Much like the Ninjak himself, the title has been murky on the personal touches that allow me to connect to the character, although the flashback sequences to a more naive version of Colin do a lot to bridge that gap. Ninjak works to maintain a seemingly flawless facade but I know once we really start to pull back that shell it will elevate the book. 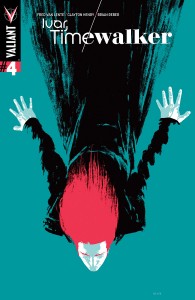 Issue #3 saw Neela Sethi (our protagonist) abandon Ivar in the prehistoric era and now we see her destination – the simpler times of February 2001, when Shaggy dominated the airwaves. After selling her authentic Nazi uniform at a gun show (because of course), Neela is determined to use her earnings to prevent her father’s death by any means necessary. However, while Marty McFly makes altering the timeline look oh-so-easy, the universe’s inherent chronological protection is one tough nut to crack.

Funny and unpredictable, all the timeline crossing nearly gave me a headache, but I can always appreciate a new twist on tired time-traveling cliches. Henry’s art clearly and neatly express Neela’s wide range of emotions, which is never more apparent when she’s in a bar packed with her time-displaced doppelgangers.  (“Sorry. ALL versions of you are cut off!”) 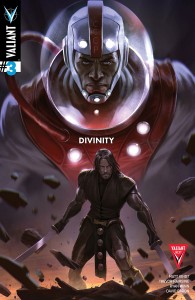 The second Matt Kindt book for this week but certainly not the least. We learn more about what happened to cosmonaut Abram Adams in the deep reaches of space and see the extent of his god-like power when he takes on the combined might of Unity. To reveal any details of the battle would spoil the book but it’s an awe-inspiring display of omnipotence. Ninjak, Eternal Warrior, Livewire, and X-O Manowar are tough in their own right… but how do you take on a god?

Enough can’t be said about the art. The panel arrangement accentuates interesting contrasts, like Adams floating in the cold interior of his Soviet ship followed by the psychedelic void of outer space. This penultimate installment is a truly beautiful issue that highlights the juxtapositions that the comic book art-form can do so well. “Divinity” is epic storytelling from line to letter.