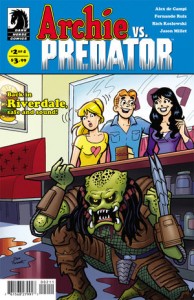 AvP takes on a whole new meaning when the Archie gang unknowingly brings a ruthless alien hunter back to Riverdale. Targeted by the creature, Betty and Veronica reach out to Sabrina to make sense of the supernatural goings on, but it’ll take more than a teenage witch to deal with this ugly mother. The Riverdale gang get Jughead to decoy as Veronica (complete with dress and wig) to draw the monster out and make their stand.

While the inaugural issue was mostly PG, this second book in the 4-part series forgoes any pretense of keeping this unholy mash-up kid-friendly. Blood flows, heads explode, and there’s even a reference to third base (and I’m not talking about baseball). Yet somehow the faithful art style and de Campi’s black humor make the adult content work. Jokes like the Predator’s display having emojis and Veronica being constantly splashed with gore show this series has its tongue firmly planted in its cheek. With only two more issues to go, I really want to see who will survive.. and what will be left of them. 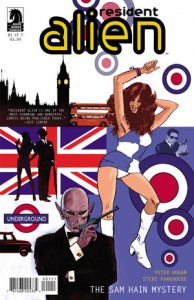 A Swinging Sixties cover introduces the first chapter of this mystery which, I have to confess, left me a bit underwhelmed after reading the #0 issue. Dr. Harry Vanderspeigle (who is actually a marooned extraterrestrial) searches for an author he likes when he’s told the spy novel writer may be a fellow resident of the small town of Patience, Washington. The appearance of a mysterious briefcase raises more questions and the curiosity of our lead.

While the art doesn’t lose its touch, the panels are mostly filled with talking heads and our mystery takes a few false starts before kicking off in the final pages. Understandably, this entry serves as a first act to set up our coming chapters, but it doesn’t deliver a whole lot on its own. I hope issue two ramps up the languid pace. 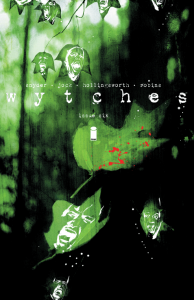 “This is not an ending” the first page proclaims, but it is for this storyline. This issue closes out the first arc of the series that began way back in October (Wytches #1 was my first review *wipes tear*). Desperate to rescue his daughter, Sailor, from the wytches’ lair, Charlie Rook finds that the townsfolk are deadly serious about keeping those that are “pledged” for sacrifice, pledged.

Having felt like I was missing something while following this series, this issue lays everything out. Questions are answered, secrets are revealed, and it’s heartbreaking. I can’t say too much without spoiling it all but there’s a lot to be said about having to choose between your spouse and your child. The horror shifts from the supernatural to the deeply personal. My sole gripe with #6 is I found Hollingsworth’s staining effects distracting at times. I’ve really dug the look so far and the way it adds tension to scenes, but I was periodically straining to make sense of the action. Other than that, Jock and Hollingsworth’s artwork take us through an exhausting (and poignant) finale. Snyder and the creative team have fleshed out a terrifying world and I can’t wait to see where they take it next. 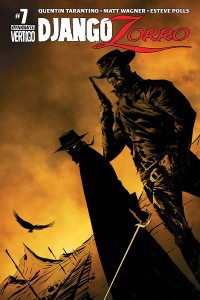 Don Diego says adios to Bernardo and we say goodbye to one of the most clever crossovers in recent memory. Despite their falling out last issue, Zorro’s impact on Django Freeman has influenced him to take bold action against the oppressive forces in Arizona. Simultaneously, Don Diego drops his foppish act for the villainous Archduke and we finally see what we’ve all been waiting for – Zorro and Django battling side by side.

#7 is a thunderous finish to this mini-series. It’s an extra-long issue that wraps up loose ends, sports wonderful dialogue, and even has a Mexican stand-off of sorts (this does have Tarantino’s name on it, after all). Polls’ art embodies all the grit of the Old West, perfectly capturing the Arizona setting and action. I really hope a Lone Ranger crossover isn’t far behind. 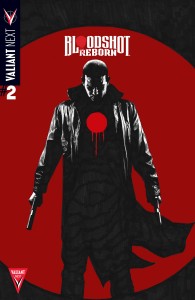 “This is America.. You can get guns anywhere,” Ray Garrison (aka Bloodshot) says before he buys a small armory to face off against a nanite-infused psychopath. Leaving the anonymity of his rundown motel, Bloodshot tracks down a madman who massacred a movie theater (talk about topical). However, “madman” is such a subjective term – our lead is on the road with two hallucinations, one of whom may not be entirely imaginary.

“Bloodshot Reborn” is lovingly illustrated, from the intensely detailed wrinkles in crime scene scrubs to the multi-colored Colorado skyline. Lemire is sticking to his word on taking the character somewhere new, as the completely-mortal Bloodshot is simultaneously haunted and seduced by the power of his nanites. 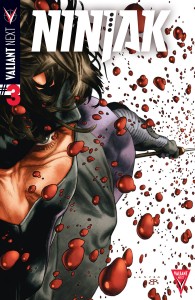 I initially wasn’t going to review this issue but after finishing the last page it’s my top pick of the week. The plot takes place in no more than a few minutes, as our lead ninjutsu spy has just been thrown out of a window. To avoid blowing his cover on a delicate mission he must escape the deadly bodyguard, Roku, erase his presence on the building’s security cameras, and – oh yeah – not fall to his death. The art is top notch, jumping from fantastic fight scenes to Ninjak’s traumatic childhood. And as if that wasn’t enough bang for your buck, the last few pages are reserved for “The Lost Files”, which depict Colin King’s pre-ninja days as a spy.

I had previously knocked the series for being too cold. Ninjak’s ultra high-tech always saves him in the nick of time, ruining the tension for me. But when faced with high stakes and a ticking clock, it’s a blast seeing what tricks Colin has up his sleeve. Also, there’s some dry humor and more insight into the man himself, which I enjoy. I really don’t know how they’ll top this one but after the breathtaking cliffhanger here I’ll have to return for issue 4.