We take our first visit to “Harrow County”, we say goodbye to “Solar: Man of the Atom”, and “X-O Manowar” sounds the trumpet of war – all that (and some bonus coverage) in this week’s reviews from Dark Horse, Dynamite, and Valiant Comics. 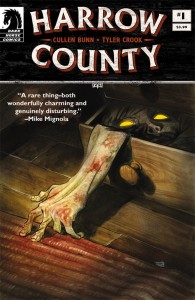 Sporting a Mike Mignola quote on the cover may almost overhype the inaugural issue of this new horror series, but Bunn and Crook deliver the goods this first time out. We jump right into it, with the eponymous township hanging a witch who, as witches tend to do, “… did not die easily.” Goodness – another witch book? What did Scott Snyder start?

Hester Beck wasn’t the victim of false accusations though. With a list of charges ranging from “blasphemous congress with heinous things” (gulp.. oh boy) to kidnapping babies, homegirl definitely rode a broom. Hester’s gruesome demise (and promise to return) is followed by the introduction of father-daughter farm folk Isaac and Emmy. Nearing her 18th birthday, Emmy’s simple life is slowly being beset by some bad omens which, by issue 1’s close, are becoming hard to ignore.

This book presents a perfect marriage between art and writing. From the ominous language to the dark water colors, the creative team are completely in sync. Crook’s simple style proves no less evocative, with small details bringing the characters (and horror) to life. And as if that wasn’t enough, there’s even a one page bonus story of a baptism gone wrong, drawn by artist Owen Gieni. 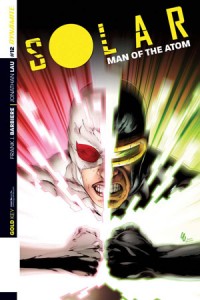 “This all started with an accident”. Alas, these dozen issues have been quite the ride but we say goodbye to the Selenski family in true form: with some great family moments and atomic energy. After halting the nuclear destruction of Earth, the Solar family (and Dr. Spektor) turn their full attention to new baddie, Eclipse. Father and daughter get to shine and there are some intense action panels near the end (even if they are a bit less defined than I would prefer).

I will be sad to see my favorite Dynamite title go. I enjoyed the series most when the Selenskis were getting into shenanigans in space and I was hoping to see them return to the stars. Then again, Erica’s powers have risen dramatically, perhaps trapping the series in a corner. All in all, issue 12 was a fitting send off, with Erica showing off her unique wit (she insults Eclipse for stealing her costume design while punching him in the face) and the artistic spin of her superpowers. I hope the sun hasn’t completely set on the Solar franchise. 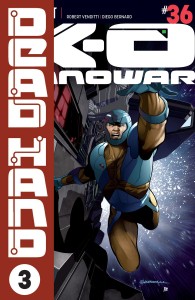 Last issue was my favorite of the series so far, having jumped on back in December. Issue 35’s dramatic highpoint comes when Aric comforts a scared mother before she and her entire alien planet is turned to ash by the relentless Dead Hand robot forces. That may sound like a lot of comic book nonsense but I nearly started tearing up. I would’ve given it a perfect score had I reviewed it.

Following on the heels of those events, this issue slows down significantly as Aric assembles a force to take on the seemingly invincible Dead Hand. Aric maintains his barbarian king confidence, we see variations of the Manowar armor from around the galaxy, and Colonel Capshaw pops in with her HBIC charm. This is not a bad issue by any means – it just suffers from being sandwiched between two exciting ones (and issue 37 is looking to be quite the throw down). As a “calm after/before the storm issue” it serves its purpose of getting us from A to B.

And now for something completely different. I wanted to review a few more titles in a less detailed format. Let me know what you think!

Lady Killer #5 – Issue 5 closes out this Cold War-era saga of an assassin/housewife who tries to find her work/life balance in pre-Womens’ Lib America. The slavishly recreated 1960s decor and fantastic coloring make this series pop and its social message never becomes heavy handed. It was a fun title with a versatile concept that I hope gets revisited soon.

Unity #18 – After many issues, we finally see the mission that rocked the Unity team and.. it was kind of underwhelming. However, even with that, this issue still manages to crackle with that Kindt signature flair.

Rebels #2 – This Colonial-era title sports some great art but the story itself is almost too PBS-y.. but then again, I don’t really care much for the American Revolution as a story setting (sorry, Assassin’s Creed).

Reanimator #2 – I don’t know why I do this to myself.  I didn’t like last issue and unfortunately issue 2 is more of the same. The art can be surprisingly decent sometimes but the excessive writing clutters the page and doesn’t add much to this already disappointing story.