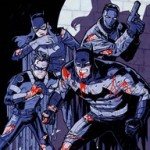 After nearly a year, twists and turns.

They have two more issues to kind of tie this all together. I’m curious to see what the masterplan actually was because it seems weird that everyone in Gotham got played by the enemy.

Aside from that, really solid action in this issue. The Bat-Family is on the offensive and kicking arse. In contrast to last week, DC does a really nice callback to The Killing Joke with Batgirl and The Joker’s daughter. Don’t worry only a passing line!

The art is top-notch with some of the finest work in the series. I was partial to the panel with a burning Gotham being reflected in Jim Gordon’s trademark glasses. A hell of a visual. 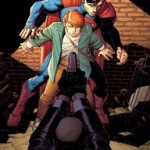 Superman 38 left us with many questions, and was curious to see what threads Johns picked up with in issue 39. Focusing on the budding friendship between Superman/Jimmy/Clark Kent seemed like the right call to make after this issue.

We get to learn a lot about Superman’s character even when he isn’t that “Super.” The scene where he steps in front of the man holding a gun had actually weight behind it because you knew Superman was no longer invulnerable, but you realize his greatest power is his ability to connect with the average person.

But at the same time, it was interesting to get some answers you probably weren’t seeking. While numerous writers and sources have tried to explain away why people wouldn’t be able to notice that Superman is Clark or Clark is Superman, this book throws another meaningless explanation your way. On the opposite side of the spectrum though, it gave a very fascinating reason for how Superman dresses since he doesn’t really feel temperature the way the rest of us do. It’s not anything I’ve ever thought of, but was a fun little conversation.

I would have to say though. Not a huge fan of the art in this book. It just never connected with me. Don’t like Superman’s face at all either. 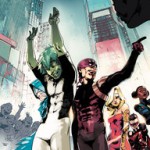 There’s been some criticism about DC heroes in the New 52 as many of them don’t seem to enjoy being superheroes. After successfully preventing doomsday in Manhattan, this issue looks at the Titans celebrating and living up life as celebrities in New York. It doesn’t make for the most engaging story since the subplots are Beast Boy and Bunker at a knock-off SNL, Cassie and Powergirl being fame-stalked at their apartment and Raven at a concert.

The backbone of the story is the strange way people are reacting around them, and that proves to be less of a mystery by the end of the issue. We do get hints of the next big arc though.

The art is so hard for me to discuss. I hate the Teen Titans costumes/designs since the New 52 launch and that just sours me on the entire book. But the art itself is pretty solid. I’m so conflicted. 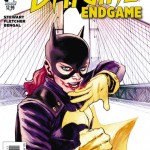 It isn’t the easiest thing in the word to pull off a silent comic. You take away one of the medium’s strength in story-telling, but it’s a great thing that visuals is such a key element of the genre.

First, let’s start with the bad. Since this is a silent issue, there isn’t much of a story. Batgirl is trying to rescue those who have been uneffected by the Joker’s latest toxins. In doing so, she leaves behind one little girl, and the comic is trying to get her to safety before any harm befalls her. It has some nice beats, but a fairly simplistic story.

But sometimes there’s a beauty in the simplest things. The story is told so extraordinarily well between Batgirl’s facial expression and the supporting cast we get to see. I loved the sequence where she is trying to get the little girl to smile to try and blend in with the Jokerized citizens.

From Batgirl using “geolocation” to track her cell phone to the numerous smilies and then acting it out. A genuinely fun scene, and the pain that becomes the girl when she realizes she is in over her head. It kind of made me think of when people force themselves to appear happy for the benefit of it. Summed up perfectly in 3 mega-depressing frames.

It didn’t advance the “Batman Endgame” story too much, but was an enjoyable read nonetheless.