Show of hands – who here has kinda-sorta-maybe heard of Solar? Now put your hands down because this is the Internet (unless you’re stretching or being robbed). Solar is a part of Dynamite’s acquisition of old Gold Key Comics characters, like Magnus: Robot Fighter, Doctor Spektor, and Turok. Our crimson-colored friend has bounced from Valiant to Acclaim to Dark Horse, but none of that matters in this 4 issue collection.

The book opens with a bank heist interrupted by Phil Seleski – the Man of the Atom, who turns bullets into steam and protects a woman from a headshot by making her cranium permeable (?!) with the power of equations. No, really – Phil’s attacks are accompanied by captions of complex equations, interpreting his mastery of the atomic world. And it is bad-ass. However, something goes wrong and Phil summons his estranged daughter, Erica. And then something goes even more wrong. Just your run-of-the-mill, father-daughter, atom-controlling superheroes fighting aliens with a dash of corporate dealings.

I really have to hand it to Barbiere. He could just have Phil blasting energy beams, which would be fun. But within the first two issues our hero is out of commission and the torch is passed to the reluctant Erica. While she can get a bit Juno-y sometimes (we get it – you’re a cool, hip young woman) she’s a capable and (most importantly) interesting vehicle for this story. They play off each other very well: father and daughter, logical scientist and artistic architect, left brain and right brain. 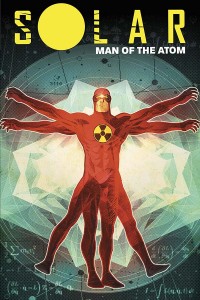 I’m picky with my sci-fi. Too scientific and I get bored, too fantastic and I get lost. But there’s just enough science to vaguely justify things without getting bogged down in the facts and the familial ties keep the story emotionally anchored amidst all the alien blasting. Not to mention the humor, which is present but doesn’t try to dominate the narrative.

Okay, enough praise for Frank – let’s talk about this art. From childhood flashbacks to battle scenes, line and color are on point. There’s a vibrant richness, with the energy attacks practically glowing off the page, diffusing on the same neon/electric/ultra-violet/whatever color spectrum. Dynamite even managed to package the multitude of variant covers into this collection, making this a bonafide feast for the eyeballs. My one art gripe (and I’m not the only one) is with issue 3. I don’t know if it was an artist change or a rush job but mid-issue it starts to look rough. I kept flipping back and forth to make sure I didn’t miss something. The issue finishes strong but uh… what was that?

Flaws aside, Dynamite’s crew has managed an impressive first outing for their new property. I just hope they stay on top of it, now that I’ll be following Erica and Phil around the galaxy.

Review 6 (out of 7) – Impressive art and writing. Father-daughter bonding over blasting aliens with energy-equations. Adventure is Solar powered.