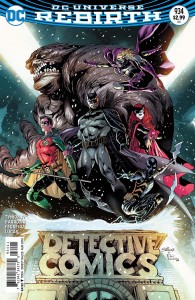 DC’s Rebirth sees Detective Comics return to its original numbering with issue #934, but even with almost eighty years of history behind it, this issue is a great ‘jumping-on-point’ for new and old readers alike. Standing apart from Tom King’s Batman, James Tynion’s Detective Comics features an ensemble cast of characters familiar to many longtime DC readers.

Opening with a violent conflict between the assassin seeking redemption, Azrael, and a Batman-lookalike, Tynion teases a mystery too big for Batman to solve on his own. A mystery that threatens every one of Gotham’s vigilantes. In order to prepare them for whatever threat is coming, Batman turns to the military expertise of Kate Kane, the Batwoman and newly drill sergeant of Gotham’s next generation of heroes.

Tynion does Kate proud by establishing her as Bruce Wayne’s peer. For most of her publishing life, Kate has treaded carefully around Batman and the “Bat-family” on the fringes of Gotham. Batwoman has been uniquely removed from the cross-overs that have plagued other Bat-books, often impacting negatively on their planned narratives and momentum.  As a consequence, however, DC has failed to capitalise on the narrative possibilities of her familial relationship with Bruce and the Wayne family. Kate has long since proven herself worthy of Bruce’s respect and Tynion acknowledges her worth through Bruce’s recognition of her strength, giving way to their new partnership.

What follows is a quick introduction to the members of their team, that serves both to establish their individual capabilities and the dynamics of their relationships. Though only a couple of pages are given to each character, Tynion proves he is more than capable of handling the unique voices of Spoiler, Red Robin, Orphan (Cassandra Cain) and Clayface, with strong and engaging characterisation that feels effortless on his part.

Eddy Barrows brings Tynion’s writing to life with gorgeously detailed pencils. His Gotham is hauntingly beautiful, yet somewhat unnerving. His command of action scenes, bold and powerful. Every punch has purpose and weight; the body language strengthening Tynion’s characterisation. Barrows’ layouts are also interesting and give momentum to the action, without distracting from the writing. The lush colours of Adriano Lucas pop against Eber Ferreira’s inks. The hot flames that encircle Azrael in St. Michael’s Cathedral and the deep reds of Batwoman’s costume are but a few examples of Lucas’ visually arresting colourisation. Detective Comics #934 truly is a beautiful issue. Unfortunately, Barrows is only solicited on pencils through issue #936.

Verdict: 7 (out of  7) – Detective Comics #934 delivers one of the strongest Rebirth debuts thus far with a compelling concept, dynamic characterisation and gorgeous art. This is the boost Detective Comics needed to step out of Batman’s shadow. Thankfully, the next issue is only two weeks away.