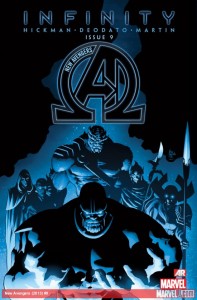 New Avengers #9Â
Written by: Hickman
Art by: Deodato
In recent reviews of Avengers and Infinity, I have stated that I find his stories to often be from the point of view of characters who are boring or lifeless and too plot heavy. His New Avengers, however, is what I love about a Hickman book. Here we have plot inside of plots: The war between Atlantis and Wakanda, the defense of New York from attack, the attack of the Jean Grey School, capture of Doctor Strange by one of Thanos’ very ambitious henchmen, Thanos’ attack of Earth and focus on the Infinity gems, and the main plot of New Avengers: Incursions or other Earths from other realities merging with 616 Earth and destroying the universe. Hickman weaves these plots together- the ramifications of Wakanda/Atlantic conflict coming right before Thanos’ attack, the corruption and betrayal influenced by Thanos’ henchmen and the last thing our heroes need – an Incursion.
But what Hickman does best, is take 6 characters who have been around forever, and focus on their actions and motivations while all this is going on. Specifically, Hickman seems to make a division amongst the group: scientists and kings. Hank, Tony, Stephen and Reed are the scientists, but they are also heroes- they want to stop Thanos and save the planet from incursions. Strange seems the worst off of all, willing to make a huge sacrifice to save the planet and caught by Thanos’ henchmen. But on the flip side, we have kings. And to us, the idea of kings is something foreign to many. Panther, Namor and Black Bolt have different motivation – are they heroes? Yes. Are they intelligent men? Yes. But they also see nation as being sometime more important than being a hero or saving innocents. And that point of view, those motivations and those actions are infinitely more interesting to the larger story of Infinity and New Avengers than the conflict and story of the Avengers right now.
Deodato’s art is top notch, as usual. And while I really enjoyed Epting and hope he’ll be back, I do appreciate Deodato and think he might be even more fitting for this chapter of New Avengers.
Review Score: 7 (out of 7) 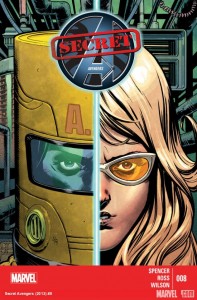 Secret Avengers #8
Written by: Spencer
Art by: Ross
After a SHIELD focus arc on their illegal and unsanctioned attack on AIM island, we get a nice pullback to AIM’s side of the story. In the first few issues we got a peak at the AIM High Council, and while we’ve seen a few members in action, we get a much better look at the reality of AIM island and the conflicting personalities of the Council. And much like Hickman’s High Council of Hydra, AIM’s High Council is just as fascinating as the different members each seems to have their own agendas, wants and schemes. We also get a little more focus on Mockingbird, which is nice to see since she has been largely unheard from in MarvelNOW. I appreciate Spencer using her history as part of the story and the emotions that would go along with an agent dealing with the memory-tool they have set up from the start of this book. I also want to say that I am happy Ross is back. Guice is great, but Ross brings a cleanness to this book that is great for the reader, but also sets the dirtiness of SHIELD and AIM into the light of the reader.
Review Score 6 (out of 7) 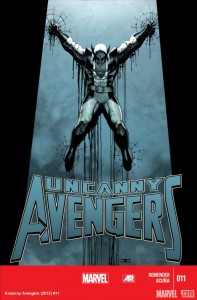 Uncanny Avengers #11
Written by: Remender
Art by: Acuna
I have stuck with Uncanny Avengers when many abandoned mostly because I have really liked Remender’s team books- his Uncanny X-Force was fantastic on a pretty consistent basis and his Secret Avengers was good though had its flaws. His Uncanny run got off to a rocky run, mostly due to it’s inconsistent art and what many have said is the forced nature of the team. And while I can understand those issues, I stuck with the book and I have really appreciate where it has gone after the 1st arc. Remender is using furthering the plot lines that he already developed in his run on Uncanny X-Force but in a much grander scale. The team has been divided, not just by space but by their own personal histories and philosophies: and we get a pitch for segregation to one specific character but in fact the entire world. And with this, we see how the Apocalypse Twins could be good or at least understandable intentions but are products of their genetics and their upbringing. I have enjoyed the focus of the book and I think the character moments are really well done. Acuna’s art is great if not perfect for this book and have really helped a consistency is needed. My only real issue is that with the choice of Sentry to be a Horsemen of Death, Remender feels the need to dip into one of Marvel’s worst, most convoluted back stories ever. And it’s distracting. I wish he had gone with any other powerful character- even Thunderstrike would have been better.
Review Score 5 (out of 7)