Green Arrow #22 by Lemire & Sorrentino: With the success of Arrow, it must have been pretty obvious to DC that Green Arrow was a book that they needed to take full advantage of that success and the blank slate that is the New 52. Â With Lemire & Sorrentino, they have done just that. Â After an amazing issue that both wrapped up their first arc (as well as really the issues since #1) and set up what seems to be a large part of their first run, they dive in to their second arc with a dynamite first issue. Â What seems to be their plan, at least for this arc, is to take elements from Grell’s Longbow Hunters, but modernize and contextualize it within the New 52 and a 21st century world. Lemire also seems to make Count Vertigo much more real, not just in background but also in mentality and powers. Â Also, the new take on Shado is refreshing, and seems to put some of the ‘attributes’ of pre New 52 Oliver on his father which makes a Green Arrow fan like me hope for more classic Green Arrow cast members to show.

Avengers #15 by Hickman, Spencer & Caselli: To start, I want to put it out there that I am a huge fan of both Hickman and Spencer. I also loved Caselli’s art & have since I’ve first encountered it on Secret Warriors. However, I’m getting really tired of this book in many ways. First, for a $3.99, 32 page book, we had 3 pages dedicated to recap, roster & writing credits. Â We also had a two pages about a signal sent out from something we kinda know about to something we know might be important. Ridiculous. Â I love what Hickman & Spencer does with Banner here, the intrigue with A.I.M. & the development of a character like Eden. However, I find that the huge roster is giving absolutely no time to develop any of them, Captain Universe seems more and more like a less like-able version of John’s Starman from his last J.S.A. run and Hyperion is just boring. Â I also find it absolutely amazing that Spider-Man was able to change costume mid-fight between issues. Â It’s unfortunate that this book is sorely out-shined by Hickman’s & Spencer’s other Avengers books.

Batman Incorporated #12 by Morrison & Burnham: It’s a pity that this book didn’t publish twice a month, because the momentum of the Death of Damian has petered out a bit in the DCU, while this book treats Damian’s Death as if it was still new and raw. Â We have the all out assault on Leviathan by Batman, while his allied have re-grouped (which they seem to have been doing for a while, ever since Knight & Robin died). We get an intense scene of Batman defeating most of Leviathan’s forces, especially a good look at the Heretic’s face, which seems toÂ snap Batman back to reality. Â We also get to see the depths that Talia has fallen, and how she has become more of villain than she ever was before. Â We also have a mystery character who has been hinted at since before the New 52, and if this mystery character is who I think she is, will cause many questions for current Bat-book readers. Â Or it’s Morrison not really caring about the New 52 🙂 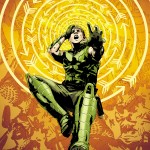 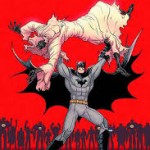 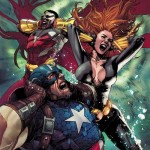