Written by:Â Snyder
Art by: Lee:
I know I might be in the minority here, but I really feel that Jim Lee might be the wrong artist for this book. Â It’s not that his art isn’t good, and frankly this book is fantastic. It’s just that I’m not sure he’s the best artist for this book. Â But besides my issues with the art, this is a great book. A very real world Superman story is being created by Snyder: a high tech terrorist network, a ‘superman’ that has been an agent of the US Military for 75 years, a US Military prepared for Superman, a Lex Luthor bringing his own vision to Metropolis and who has thought out all possible problems. Â We get to see Superman trying to save the day but dealing with the reality of the attacks he faces. Â We also get a nice look to Bruce and Clark’s relationship, especially considering Snyder has set up what many consider a definitive take on the New 52 Bruce in his current run. Â I also appreciate Snyder’s take on Clark as the investigative reporter, the new dynamic of Lois and Clark as friendly competitors and the larger mystery he seems to be weaving with the Army, their ‘Superman’, Ascension and our mysterious hospital patient.

Written by: Fraction
Art by: Francavilla:
I have two critiques about Hawkeye this week. 1.) I hope that Barney Barton’s current state and Clint’s reaction to him at the end will be explained in context to Barney’s recent history and 2.) for a book the purported that it was a 1 and done type of stories, we are on a little run of interconnected issues. Â Sure, this is a peak into Barney’s current life and childhood, and therefore a peak at Clint’s childhood, but still it picks up on threads on previous issues. Â While some might feel that this is a nod to devout readers of the book, I also wonder if it could be confusing for a new fan, just picking up the book. Â Still, great story and great art. I hope Francavilla stays as an alternate artists for this book, especially for characters issues like this.

Written by: Gillen
Art by: McKelvie:
I really wanted to review this book because I haven’t gotten a chance to write about it. It’s a very good and very unique comic which this issue is a great example of. This issue weaves together the status that the team was left in at the end of the 1st arc, but also weaves it together with a really cool issue 6 that saw a team up of former X-Men Prodigy and Young Avengers Speed. Prodigy has been looking for the Young Avengers but realizes why they haven’t been on Earth as much. Â We get a very interesting way to fill in readers on the team activities which brings me to a important point about this book. In many ways, more than almost any other comic out there, it’s geared to a teenage/youth culture that uses social media like Twitter, Pintrest and Tumblr. Those are cool and unique story telling devices that are double edged swords. Â I’m sure many love it and find it fascinating, but I’m sure there are plenty of people who aren’t as engaged in social media as some, that could be turned off by it. Â On a final note, I do enjoy where this book is going, some of the character arcs as well as the multiverse exploration that seems to be a big part of the next arc. And always fantastic art by McKelvie. 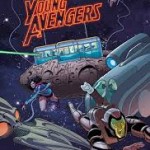 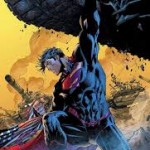 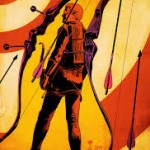