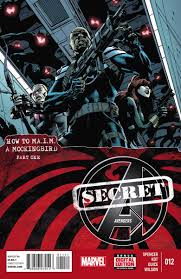 Written by: Spencer and Kot

This is Spencer’s last arc before Kot takes on the responsibilities. I hope that he follows the same vein and the same feel that Spencer has set up. This book has become a nice continuation of the espionage feeling that started with Secret Warriors. With this arc it seems we get a conclusion of what Hickman and Spencer has been building with A.I.M. in the FF & Avengers books, as well as exactly how Mockingbird would do in deep cover and the answer to many fan’s question of where A.I.M.’s most well known member/leader has been. It’s a good start to what I hope is a great final arc for Spencer on the book. 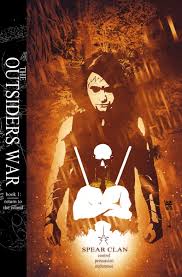 After a brief respite where we finally got some facial hair for Ollie in the New 52, we get back to Lemire’s main story with the Outsiders which brings Ollie back to the island. It’s very smart for Lemire to focus on the island since its such a big part of Arrow itself. And with that Zero Year issue last month, Lemire gave us not only Moira and Dig from Arrow, but also gave us a mystery in itself during Ollie’s time on the island that seems to have nothing to do the current Outsider storyline. I’m also interested to see what Lemire has in mind with these New 52 Outsiders – a concept that seems to be a League of Assassins type group for Ollie but almost makes more sense for him as an archer and that Lemire’s tied to his family and to other C & D list DC characters like John Butcher. This was a good first chapter to what I hope is a fantastic arc. 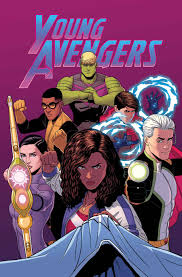 Art by: McKelvie with Thompson & Norton

This is a great end to Gillen & McKelvie’s run on the this book, tying up almost all the loose ends (except for Speed and the Patriot-ghost-thing) and ties it in heavily with Gillen’s previous run on Journey into Mystery. We get a break-up of Hawkeye and Marvel Boy, a getting back together of Wiccan & Hulkling, We also get nice moments for Prodigy and Miss America as well as Loki’s secret now semi-public knowledge. We also get to see Billy really truly take after his mother, which should have pretty interesting implications for the future. And while I’m sad to see this run end, I’m even sadder that Marvel can’t seem to get a team to take up the reigns after they are done.