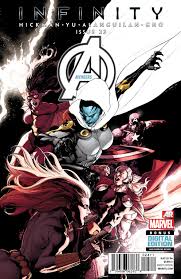 After a decent amount of issues by Yu for the Avengers tie-ins for Infinity, this issue his art starts to get more scratchy than normal but his color artists really help him pull it together. Again, I feel that this is another fill in issue before the grand finale in Infinity itself, which is funny cause of how Hickman has revealed huge plot twists for Infinity before in the pages of Avengers. The highlight of this issue is how I would like some sort of spin off for the Galactic Council or revival of the Annhilatiors with Gladiator, Ronan, Super-Skrull & Annihilus. 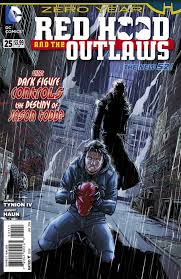 Â Red Hood and the Outlaws #25

To start, let me say that I think the New 52 has benefited Jason Todd the most. Instead of an unbalanced psychopath we now have a character who is much more of a mercenary/anti-hero but not one without conscience or morality. I haven’t been following Tynion’s run on RHaTO mostly cause of the pretty awful art that’s accompanied it. I know he’s been trying to tie the book into the larger Bat-mythos, especially post-Batman Inc, with the League of Assassins with the other mystical assassins group that Lobdell had set up on the book’s initial run. I picked this issue up due to its tie in with Zero Year and it was a welcome surprise. We have a nice bit of character development for Jason, his new backstory in the New 52, and a little taste of Jason’s connection with Talia, as well as the League’s war with the other group of assassins. 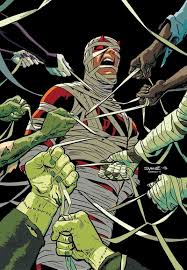 Unfortunately, this has been a let down of a side arc in the Sons of Serpent story line. It seems that this was just a reason for Waid & Samnee DareDEVIl to meet up with the League of Monsters. And while cute and interesting to see the Serpents to have a slightly mystical/magical edge this time. It’s also interesting to see Matt deal with racial issues but this arc seems to be lacking the emotional ‘umph’ that Waid and Samnee had in the long term Bullseye arc.