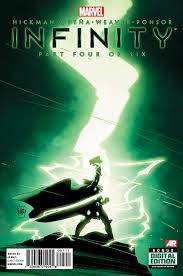 Fantastic issue. While my haul wasn’t big this week, Infinity #4 and Batman #24 might have been the best books of the month. I really enjoyed that from the get go – Hickman decides to follow the Thanos/Black Bolt & Inhumanity plot line and Captains America and Marvel with the Galactic Council planning against the Builders. But the real scene stealer is Thor, ‘negotiating’ terms of surrender on Hala. And here we have the ‘War’ Avengers – while 10 years ago this scene would have been unheard of, today we get a ‘realistic’ Captain America and his plan – for Thor kill a Builder and liberate the Kree, rally the Accusers and show the universe that winning is a possibility. I really hope that Hickman delivers in the last two issues, and the tie in issues as well. 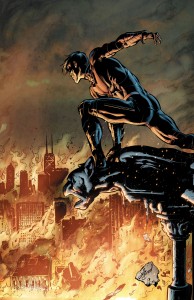 To start, I truly miss Booth’s art on this book. However, I’m glad that Conrad has the job as I think his art is good and that Booth’s small additions to Nightwing’s costume have stayed. In some ways, it is odd to have an arc that obviously ends before Forever Evil #1 considering what happened to Nightwing in that arc. However, the Chicago arc has really set Nightwing in a very different light than we’ve seen in a while. He isn’t tied to Gotham, we have a real city that has a new history in the New 52 DC Universe and we have some closure on Zucco as well as a new and improved Prankster. 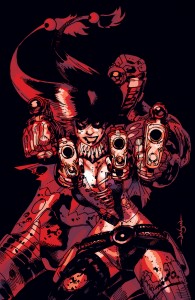 I haven’t picked up Suicide Squad in a while and thought I heard good things about Kot’s run, I really enjoyed this issue by Kindt. We basically have two Squads facing off for a very large prize. The actual squad being run by a Amanda Waller who is confined to Belle Reve while an alternate, hero Squad is being manipulated by Crime Syndicate’s new agent – the Thinker and his bodyguard, Kind Shark. We also have a wildcard, in the form of James Gordon Jr. running around, which to me seems like a natural Suicide Squad tale. This seems to perfectly set inside Forever Evil and I would love to see some of the heroic Squaders stick around post Forever Evil or stay with Kindt to his next DC book. As usual, Zircher is stellar and his tone fits the dark theme of the book.