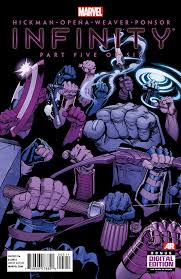 This struck me as an odd issue – after the buildup of the Architects and their robotic Alephs, it seems that once their Ex Nihili abandoned them, their fleet destroyed and Captain Universe killing many of their leaders, the Alephs seemed to be dispatched easily. We get the set up of the Avengers universe and we also get a spotlight on the Illuminati trying to track down Thanos’ pillaging of their secret plans as well as the introduction of his son Thane, an Inhuman Eternal. A good issue but it seems flat, especially it seemed after the previous issues of Avengers and New Avengers seemed to leave the Alephs on a rampage and a possible understandable reason behind the Architects plan. The art, of course, is fantastic and Hickman certainly nails all the characters, but that has been consistent through the entire mini. 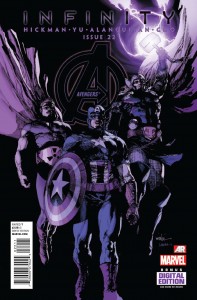 This is an odd issue -seeing the Avengers with the Galactic Council mounting their rescue for Earth as it seems it’s more of an opportunity for Hickman to hit on characters and character moments that got cut from chapters before. We get a little romance, a Asgardian pep talk and a Thanos minion who, we know will continue failing his master. Not bad, but a very blah issue. 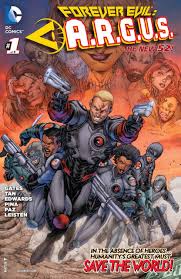 Not a bad first issue for this mini, especially since it just recently changed writing hands between Kindt to Gates (though from scheduling issues more than anything) and with three artists. Wisely, it seems that Pina takes the majority of the flashbacks, which gives us Diana’s 1st costume, and the creation of A.R.G.U.S. while Tan and Edwards seems to give us Trevor in modern day: being saved from the fate of the Leagues, catching up on the events of Forever Evil and trying to save the President. It is a good first issue, though at the same time, Trevor has never been the most interesting and the plot seems so action intense, that it leaves little time for character moments.