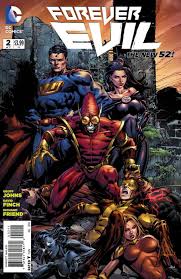 In my review of Forever Evil #1, I stated that I hoped that the second issue wouldn’t be more set-up. And…it was. Well, it was but it was also more. Johns allows the readers to take a peak inside the Crime Syndicate, which is important to help new readers or even regular readers familiarize themselves with this group. While last issue was from the point of view, mainly of Luthor and Nightwing, it was also from the super-villains freed and gathered by the Crime Syndicate. Here, we get the direct look at the dynamics going on with the Crime Syndicate and we can see Johns already laying the seeds for the mini-series. With that said, I hope that with the ending of this issue, that next issue will be about action instead of more ‘set-up’.

As for Finch, there isn’t much to say that hasn’t already been said. It’s not my favorite art, and I think many times, its downright unlikeable. I much prefer the way Reis portrayed the characters, especially Johnny Quick. 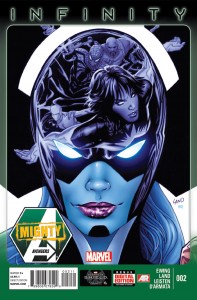 When this team and it’s roster was announced, I was excited by the inclusion of the Blue Marvel to the roster. Of any of the Superman type characters that exist or have existed in the Marvel Universe, I think the Blue Marvel is the most interesting and has the most potential. In this issue, we get a general set up to who he is and where he is in life. He is a great way to book end what is mostly an action filled issue. And while this certainly move fast, there were points where it would have been nice to have more character moments for a character like Spectrum who has been off the board to many readers. Also, some of the moments for a character like Cage were a little hockey and also predictable. What wasn’t, however, was the ending which I liked and seems to set up a much larger problem for the team and gives a threat that is appropriate for the Blue Marvel and his power level.

Land’s art, again, does not distract like it has on other books that he has done. He still has his flaws, but in no way does it take away from the story or my want to give this first arc a try. I do wonder how this fits into the overall Infinity since the two members of the Thanos’ Black Order have been seen doing other things and having a different relationship to Thanos than is seen here. 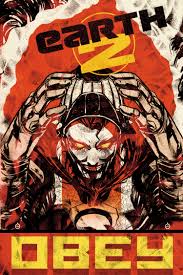 A fantastic issue and a great end to Robinson’s run on the book. While I am sad to see him go, I do think he’s created a fantastic world on Earth 2 and feel that the world is ‘safe’ in Taylor’s hands having read his work on Injustice. Robinson leaves the book with one main plot, and 3 subplots, and I hope that Taylor gives the main plot a little breathing room after such a heavy couple of issues that were Robinson’s last. Here we see a resounding win by the Steppenwolf, only to be betrayed by his own Weapons of War who are truly allied with Darkseid – a plot line, to me would seem to lead to the eventual interaction with the Justice League. And while Brutaal’s true identity is not surprising, the last page is and sets up a whole new dynamic for the the book. Fans also get to see the beginnings of the Justice Society and what we assume will be the coming together of the new Wonders and super-human operatives of the World Army.

Scott’s art was fantastic and I’m very glad that she’ll be staying on the book. I will say that as I read it, I realized that for a book that embraces diversity, the group that faced off against Steppenwolf was very male heavy and I hope Taylor is able to focus on more of the female characters (I think we can now see how Fury might become allies to our heroes) in the next few issues.