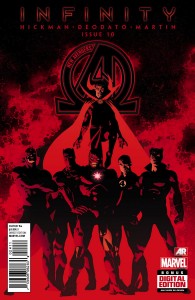 From the start I expected, and now I can confirm that of the two storylines of Infinity, the Earth/New Avengers one would be the more compelling and what I would like more. Here, Hickman drops an invasion of Earth by Thanos for more than just his usual “I want to kill everything’ movtive: He wants to kill his son. Who happens to be an Inhuman (though one who is pre Terrigen Mists) and living on Earth. We also get a secret history of Earth’s Inhumans – there are more than we know and they are all around the world. Coupled with the war between Atlantis and Wakanda, Namor setting up Wakanda to be heavily invaded by Thanos, the corruption of Dr. Strange, secret plans by Black Bolt and Maximus and wait for it…..the original plot of the book – another Earth from another dimension is about to crash into ours. Here Hickman beautifully weaves these plots together while at the same time, giving great character moments for his main cast. Deodato also does a great job conveying the intensity and weight of the moments, from the larger action to the smaller moments between characters 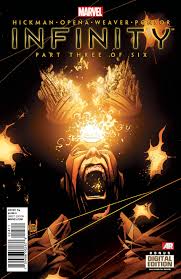 The only real fault with this issue is that it relies more than any of the previous tie in issues, this issue of Infinity relies heavily on New Avengers #10. Besides that, Hickman truly balances the two storylines perfectly. It’s of note, that Earth storyline has become more about Thanos and the Inhumans, with passing notes of the storylines playing out in Thunderbolts, Mighty and New Avengers. I think it’s been interesting to see Cap elevation as the leader we all know him to be amongst the Galactic leaders. It’s also nice to see some role reversals – the Skrulls and Brood are good guys here, while the Kree fall and the Spartax flee. The art is superb and I think getting two great artists like Opena and Weaver, and assigning them to draw the different storylines is also a great move for the book. 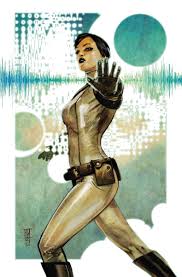 My one big problem with this book is that while I like Guice and Ross separately, I feel that its becoming jarring for fans of the book when going back and forth between the two. I’d rather that Marvel would split them for arcs instead of different issues of the same arc. Spencer is crafting a great book here- we have a classic AIM vs. SHIELD fight, but we have a new spin – AIM has gathered itself public and political capital along with a cast of meta human operatives who are dangerous in their own right, as well as an internal civil war between Maria Hill and Daisy Johnson. This feels the end of the first season-ish – the players seem finally set, for the next larger arc/chapter to begin.