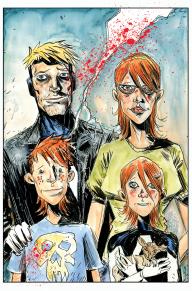 The conclusion to Lemire’s Animal Man has arrived and it was as emotional as expected. The Red was destroyed from Brother Blood and only Shepherd, Buddy, and Socks remained. Buddy told them that the Red must remain and the only way he felt safe is if Socks and Shepherd became the new totems. Buddy also agreed that he would continue being Animal Man but when the time comes for him to be replaced that I could not be his daughter or anyone is his family. Now Buddy is back home with his family and telling his wife what he agreed to and she is fine with everything. Buddy goes to check on Maxine, but she hasn’t fallen asleep yet and she wants to tell her father a bedtime story before she goes to bed. The bed time story is basically the recap of the Animal Man New 52 story but she is a princess and Buddy is a knight.

The New 52 Animal Man has reached its end. Lemire did an excellent job with this series really knowing how to keep the reader’s attention and getting emotional responses with all of the various family aspects. This issue left several parts of the story unanswered, mainly the promise Buddy agreed to of taking over for all of the Red in the universe on a distant planet. This issue did do a great job giving us a great recap of the journey from the eyes of a child. This is where the art was perfectly done thanks to Lemire providing the story as well as the artwork for these pages. It really gave the reader the “fairy tale” feel.

Overall, Animal Man was a must read each month and had so many great stories and really understood the raw emotional factor. This was a good close to a great series, but would have been nice to have some things answered like jumping forward a few years to see where are characters ended up. “Good Night Animal Man”.

American Vampire is BACK! The issue starts off with a “dark” jump back to the 1800s. After a brief flashback the issue jumps forward 11 years since the previous American Vampire issue. There is a small girl running from some men when a familiar face shows up and saves her. Pearl takes this girl back to her house and tells her it is a safe place and puts her in the cellar with three other people who all end up being vampires. Each tells which type they are and Pearl notes that judging by the new girls teeth she may be the oldest vampire breed she has ever seen. Meanwhile Skinner is chasing some people down and leaving everything in chaos just like we would expect from him. He seems to have made a new name for himself and is feared by what is assumed to be some drug lords. Back in Pearls house we find out she is tracking the breeds and the little girl tells her aboutÂ The Gray Trader.

American Vampire knows how to keep things rolling even with taking a year break. There is a jump in time and these characters are still the same characters they have always been even with the world changing around them. Snyder set up the world of American Vampire the first time around, during the Second Cycle he is going to dig deeper, make the story darker, and leave the readers shocked.Â Albuquerque was born to provide the art for this series, he just knows how to it all tie everything together and add the extra layer to the dark tone.

Overall, American Vampire is back and better then ever. Snyder and Albuquerque have vowed to not take anymore breaks and to deliver the best story possible. So if you are a fan of American Vampire you are going to love that its back, if you are a new fan read this issue because it is the perfect jumping on point! 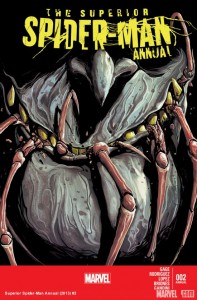 The issue revolves around Ben Urich trying to find his nephew and determine if he can be helped. Considering the whole issue is form his point of view we see very little of the Superior Spider-Man. Ben gets a call from MJ and tells him he needs to get out of the city because he knows Spider-Man and the goblin army will probably be after him. Ben goes to Peter’s company and finds out Charlie has been there and they are working on a cure to the goblin drug. Ben spreads a rumor to draw him Nephew out so that he can inject him to test the cure. Things do not go as planned and the cure is destroyed and Spider-Man can not arrest the Hobgoblin.

This issue really didn’t do much to advance the plot to the overall Superior Spider-man story which was the case with the previous annual issue. Annual issues are an opportunity to get an extra issue in each month and should help develop the plot some. The art in this issue had its moments, Hobgoblin looked amazing while other times the art seemed to lack detail.

Overall, this was an issue that took place in the same world, during the same timeframe as the story, but did nothing to advance the plot in the goblin war. It is interesting when comics take a step back and view their world from different eyes, but with this issue these were eyes that I really didn’t care to look out of.