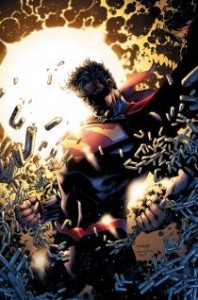 This issue felt like a summer blockbuster. This issue was packed with action and a great story. Superman Unchained #3 has the best art in a Superman book since the 52 relaunch. Snyder really gave Jim Lee a lot of work to do this issue. Jim Lee has done a fantastic job as readers have come to expect, and this issue was simply beautiful.

We have this new “villain” who Batman believes is more powerful then Superman. After seeing some of his powers and strength, it appears Batman is correct in his analysis. The background of this character was explored a bit in the issue, but it also left a few more questions as to what his true purpose really is. Seeing General Lane compare him to Superman and what Lane considers a hero to be, was an interesting character development. Seeing the map of the world and the evil shrink over time was a nice visual of how powerful this being might be. The whole back story was handled very well and makes this new character very interesting, which sometimes can be hard.

Overall, this was a very satisfying issue. Seeing Lois on her own, and not calling Superman for help was nice. Also, readers have to always keep Lex in the back of their head and wonder what he is up to. This issue had great pacing and some of the most beautiful Superman art we have seen. 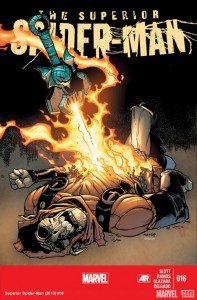 It might be time for the rein of Otto as Spider-Man to end. The last four or five issues have all felt like the exact same story with just different characters thrown in. As readers we know that Otto is Superior, but there has to be some tension to make the reader wonder if Spider-Man will succeed. At this point Otto can do no wrong and always “saves” the day.

The art in the issue is just average, nothing really stands out. The Goblin and Spider-Man always look really great, but everything else just doesn’t quite live up to them. The story seems like a rehash of the pervious one, but now Otto has an army and more toys to help him save the day. It would help make the story more interesting if there was some overall plot that the readers could wonder what is going to happen. Somehow Peter needs to make an appearance again to really start driving the plot.

Overall, Superior Spider-Man feels like a broken record. What makes Spider-Man such an interesting character is that many people can relate to him. His life is tough, which people really feel for. Seeing this version of Spider-Man being all powerful and never running into any real trouble kind of takes away from what makes the character great. 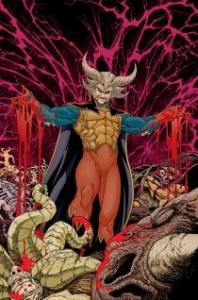 This is one Bad Ass Issue! This issue is full of pirate giraffes, Brother Blood, and an ending that will leave the reader speechless!

Animal Man #23 uses the social network bit again, which works perfectly again in this issue. The use of viral video was a good way to recap what has happened to Buddy in previous issues. This issue’s story has a great balance between the struggles of Buddy, and what is occurringÂ in the Red.

Pugh and Portela do a great job with the art. The visuals of the Red show how odd this place is and allow the reader to understand the power of this place. The more and more Maxine is in the red the more confident she becomes. Her character is really the star of the last few issues and helps the reader understand that she is going to have a huge role to play in the story going forward.

Overall, Animal Man #23 is another great issue in this ongoing story. We see this defeated Buddy who is unsure of everything, while his daughter continues to gain confidence and work toward her goal. The ending of this issue will have a lot of people wondering what will happen next. One thing is for sure, it is going to be a long two months until the new issue of Animal Man!