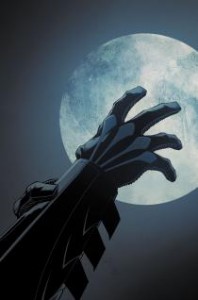 After the disappointing Annual Issue, we get what might be one of the best issues in the Zero Year story so far. We see Bruce face to face with the red hood gang and things are not going very smooth for him. Seeing this raw stripped down version of “Batman” is exciting, since he is not fully ready to assume the role. We get a spin on how he decides on the bat, which might anger some fanboy, but for this story and issue it fit together nicely.

Batman #23 is one of the most visually stunning issues of this Batman run. Again we are use to these issues being at night with a lot of dark colors. This issue the colors seemed to really just pop off the page. Seeing Bruce really be tested and beaten down is tough to accept knowing what he will become. Snyder is really putting him though a lot before he becomes The Batman. Over the course of Snyder’s run on this title we have gotten some great moments with Alfred and this issue had another. He is so much more then a butler, he is the father figure that Bruce needs and he shows that role again in this issue.

Overall, Batman #23 is still laying ground work for this story. There are plenty of unanswered questions, but each issue always leaves the reader satisfied. The focus this issue was more on the red hood gang, but we are beginning to see The Riddler has a bigger role yet to play. Snyder is really testing the will of Bruce before he becomes the hero we all love, and that makes for a very exciting story. 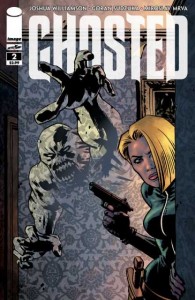 Ghosted is one of those books that has the potential to be excellent! If you take Ocean’s 11 and Â mix in Ghost Hunters/The Shinning you get Ghosted. The second issue continues laying the foundation of the characters. This story is setting up a lot of things and the slow story is welcomed. We have a very interesting mix of characters and learning their back story makes it very fun.

The art is perfect for this book. The way the ghosts are drawn works very well, making it creepy and setting a dark tone. This is by no means a mature book but there are some pretty freaky elements. One panel with a woman in a picture turning her head was done very well. This has comedy mixed it which would make for an awesome film one day based on this concept.

Overall, Ghosted #2 continues laying the foundation of the first issue while allowing the readers imagination to grab hold. What makes this book work so well is that the reader has an idea where the story is headed but the journey is the fun part. I am really glad I stumbled upon this and look forward to getting a connection with these characters. 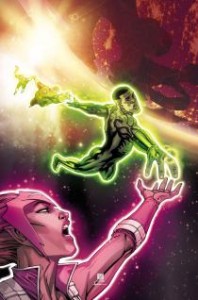 John Stewart has been out of the spotlight for a while. It is really exciting to see him back in the stoplight because when he is done correctly he can be one interesting character. I have enjoyed the creative change for this title and where the team is taking the corps going forward. We really get to see the corps in a situtaion we aren’t very used to. The Green Lantern Corps have been these all powerful members for so long that it makes some stories unbelieveable. With the rings malfunctioning we get a new internal threat, along with the general external threats. Now this title is focusing on the whole corps, and it has a lot going on.

The story of John Stewart and the new recruits is a great story. We also get tied down with the shapeshifters again and this just seems like to much. That story just felt like filler. It would be nice to move away from it and focus on what John has going on and some of the stuff occuring on Oa. The Green Lantern Corps has been known to have some great art with popping color, and so far this title seems a bit underwhelming.

Overall, Green Lantern Corps #23 had a lot going on. If this title can get more focused it could be the best Green lantern title going forward. The creative team seems to building toward something quite interesting. The end of this issue will have a lot of readers really excited for October to see what happens next.