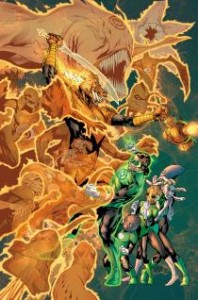 Well here is the battle with Larfleeze. This is a new era for the Corps, and the fact that these new guardians just left before rebuilding anything makes them almost as bad as the other guardians. I can’t imagine this being the big battle talked about because it seemed pretty short only being one issue. We have gotten so much fighting in these books recently, I would prefer a couple of issues of rebuilding.

We see the new recruits being thrown into battle from the get go and having to learn how to use their rings. It was funny seeing Hal get punched in the head. I can’t imagine that these are the best recruits there are in the universe at this time. With the need for so much training I hope Hal realizes he needs the best to train them and brings Kilowog back to his rightful post.

It was interesting seeing both Larfleeze and the other corps lose power to their rings and then for them to come back on. I’m glad we had Hall thinking outside the box by launching the ships and making Larfleeze think the treasure was on board, while they made their final attack.

Overall, I liked the art more this time, probably do to more corps and colors popping. I really want to care for these new recruits but they just don’t seem like Green Lantern Corps. I will be interested to see where the story goes given the escape at the end. 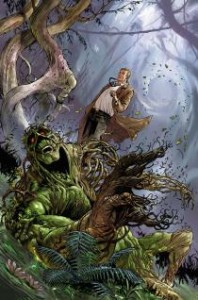 Well, I am kind of confused. Last issue we were focusing on Capucine and this issue we are focusing on the seeder. This issue was not bad by and means but this little jump in the story confused me for a bit. I am also a bit upset this story is going to only be two issues. I hope the seeder sticks around he seems like he is an interesting character. We don’t yet know if he is a hero or villain.

The seeder trying to help the town gave his character some layers even if he is only in the issue for a few pages. What I have really enjoyed with Swamp Thing post Rot World has been seeing “Alec” use the different powers. This time we got to see him take over a tree. I loved the mention that the tree felt so proud to be chosen and other trees were jealous. This is where we run into Constantine and that just felt kind of out of place. We got some interesting dialog between them but these characters were just together in Justice League Dark.

Overall, Swamp Thing #22 was an interesting story, with a shock at the end which leaves me interested. I am a bit concerned that we might have another jump back to Capucine which would not be good. The art worked for me, it wasn’t anything mind blowing, and we have another issue of Swamp Thing that left me satisfied. 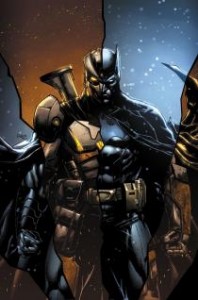 When you have so many batman books out in the DCU and one as successful as Batman the others could get lost in the mix. Detective Comics has gotten better the last couple of months, and with this issue things look fantastic. I might need to go back and look at notes from all the issue, but this might be the best issue since the relaunch!

The issue had an awesome prologue that gave us a good little story of what is going on with police being murdered in gotham, and how at first they thought it was Batman. We get to see everything from GCPD point of view, also when Gordon sticks up for Batman was very inspiring. The art was very clean and beautiful, I really noticed some of the rich details that a lot of care was put into.

After the prologue, Bruce is meeting with someone who is wanting to buy Wayne Enterprises and is from Gotham and wants to be its savior. This guy sounds a lot like Bruce, but there is something that does not seem to be right about him. We learn that there are two people involved in the police killings, and they dress up in armor, a kind of Anti-Batman.

Overall, we are not really told who is behind the mask, but there are hints. I hope this story goes on for a bit and allows time to build because it seems to be very interesting and have potential. Again the art was beautiful and I really enjoyed the prologue.