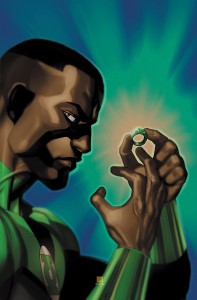 The writing team has been a great refresh for this book. There are two problems I have with issue 22 that I want to get out right away. One being, I am not a fan of the way John is drawn, there are times he just looks odd to me, but the rest of the art is beautiful. Second, I felt like there was a little to much crammed into this issue. More is not always better. It felt like some of the stories could have been developed a bit more and we could have done without some of the Fatality scenes. Now lets dig into all the awesome parts about this issue!

Finally a Green Lantern issue that didn’t have battles going of for 25 pages. I really enjoyed seeing John come back and report where he has been and what has been going on with him. It is nice to see John get his “own” book since I feel he has been lacking in the universe for a while. I do enjoy how there was discussions about all the changes the corps have gone though, and that John wasn’t up to speed yet.

We get to see John go off on a mission and really get more time with the new recruits. I would have liked to have seen more of this and less of Fatality battling the shape shifters. When John and the group arrive to help fix a dam, the corps actually helping people and not fighting a war for once was nice, we see that not many people trust them from the aftermath of the Guardians. This leads to an attack on the new recruits, this is where the art look fantastic. Colors play such a huge role in the Green Lantern Universe and in this book they really popped and looked great.

Overall, I like these new recruits and I hope we get more non action scenes with them. I wonder if John is going to inherit Kilowog’s old job of training, which would be interesting. The whole story with the rings not working is also interesting and I’m looking forward to more John Stewart. 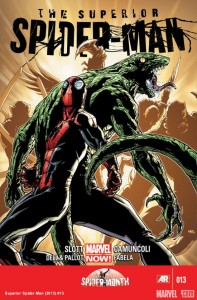 We reach the end, or part 3, of the no escape story. This issue like all 13 issues of Superior Spider-Man has Otto saying countless times how he is more superior then Peter was. We can see from his actions, and what happens at the end, that Otto thinks of just about every outcome and how to counter it. Â These actions alone prove that he can be superior at times. We don’t need to be reminded that every page in the text still 13 issues in.

This issue does have a great cameo of Lizard in it and seeing him control himself and actually help was nice. This was Dan Slott’s way of saying yes everyone can change. This makes me think Otto is going to be Spider-Man for awhile. Some of the problems seemed to be resolved fairly easy, tho I did like the twist at the end on the boat with Otto still thinking and having the upper hand. Having him revel his secret to the Spider Slayer was nice, even though he died.

Overall, the art in this issue might be up there as some of the best in the 13 issues. I like the conversation J. Jonah Jameson and Spider-Man have at the end of this issue. I am sure that will raise some red flags. Also the twist at the end should be interesting to see if Otto stays “good” or starts acting like his old self. 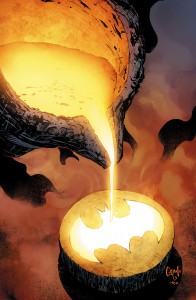 First, Greg Capullo was put on this earth to draw Batman comics. What he has done for all 22 issues has been fantastic and this is no different. The page where Bruce is talking to Edward is just amazing and really well done.

Issue 22 continues are Zero Year story line. Snyder again does a great job really separating from Year One. This is not as dark as other Snyder stuff but still excellent just the same. I like how we have yet to really see Batman. So far the focus has been on Bruce and how he doesn’t want to announce he is alive and wants to just stop the Red Hood Gang, who continue to terrorize Gotham City. Bruce is really having a hard time stopping them and we see the frustration as he has a heated exchange with Alfred.

I like the focus on how Bruce needs to come back and actually be seen in the public eye, Bruce Wayne being alive is going to have a big impact on the city and he just doesn’t realize it. I really enjoy this aspect to the story. Bruce’s uncle revels in a surprise party that he is alive and this makes Bruce more upset. This is the point where he finally meets Edward Nygma, who has not yet become the Riddler, but the riddles are there.

Overall, I am excited to see more of the Riddler and the riddles he creates. I will be interested to see the impact of Bruce being alive will have on Gotham, and how he will stop the Red Hood Gang. Capullo really understands how to draw this character and it is quite beautiful. I hope they keep “Batman” out of the story for a while so when he finally “suits up” there will be a ton of satisfaction.